I met a boy...who is stupid

This weekend was great! I had so much fun...I discovered water...and boys!
It wasn't too great...daddy was sick which just left me and mom. She did tell me to go check on him a few times to see "if he's still breathing." He was. I even licked his face a few times but all he said was "git" which I think means "leave." I tried to explain to him that mom had "dez-i-nait-ed" me as a nurse, but when he asked for my credentials I had none. He told me to git again.
Anyway, since the evil rain finally stopped on Saturday mom took me to the dogpark. The dogpark kinda blows. I've acted like I like it, but there are two major issues I have with it:
1. no dogs are ever there
2. It's just a smaller version of our yard but with more weeds and rocks and old dog turds that aren't mine and aren't even appetizing.
So after having a look of totally boredom on my face, licking my butt and running back to the car, mom said let's go. Then mom, being the brilliant woman she is, decided to take me down to the creek so I could run free in the water! Man, this was soooooo awesome! Totally worth smelling old dog turds at the dog park. I'd never really got to run in water before.
Here are some pictures from the awesomeness of the creek: 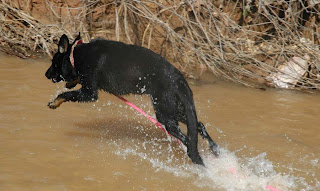 I got what mom called the zoomies (or running like a complete spaz) in the water. It rocked. 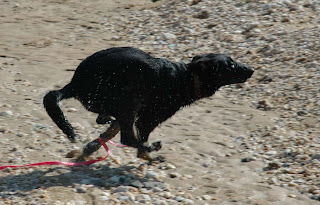 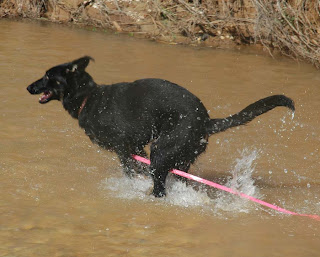 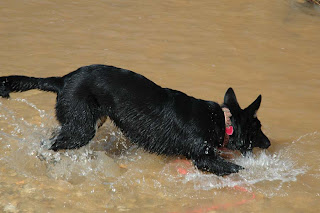 I tried to attack the water, since it got in mom's shoes....the water won. I will defeat you water!!! 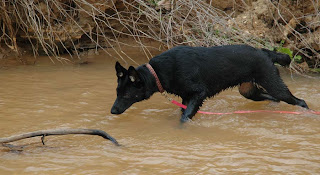 This stick kinda scared me...I stretched, sniffed it, didn't like it so I barked at it and ran away. I mean, it's a seriously scary looking stick...you should have smelled it! 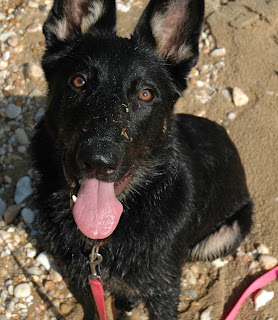 Me filthy and happy! I soooo couldn't wait to save some of my dirt from the day in the back of the car...it's still there. Mom said it probably will be for a while. Score!

So today, mom took dad to the doctor. There are sure are a lot of orange pill bottles in our house. Why do they keep getting sick? Maybe they should eat poop. It builds an immune system.

It was nice out. Mom cut the grass. I was not amused by her riding of the giant loud thing that caused all my outdoor toys to be placed in a place I can't reach, so I took a nap.

Daddy was in the bed, still breathing and mom said she was going to take me for a ride, which I could only hope in my doggy dreams she meant to the creek again, not the lame ass dog park. I was right! She said since going to the creek allowed her to "sleep in" today cause I was so tired she was taking me back.

I ran, I played, it was awesome. Then it happened. I met a boy!! Mom documented it (I think the camera is attached to her) 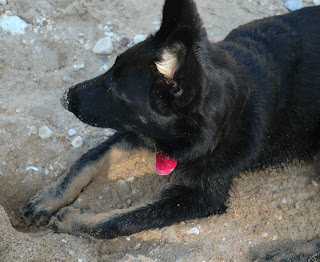 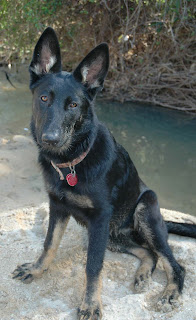 I did what mommy describes as "workin it" and struck a pose...I've watched America's Next Top Model with mom, so I've learned from Tyra how to work it. Mom said let's go see that other dog and if it wants to play with you. 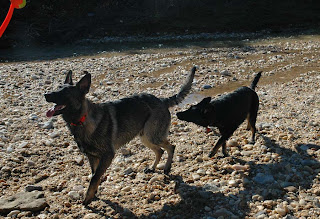 This is him...isn't he dreamy? He's a sable GSD. I snuck up on him and checked him out...he had an ass of steel! You could bounce a snausage off this thing. I was way impressed... 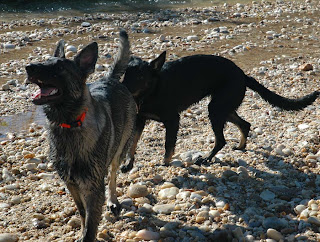 As you can see, I was mezmorized by his booty. His daddy had something called a "chuck it" which just throws tennis balls very far. I pretended to be interested and I just watched for a while as he ran. He was soooooo handsome! Mom got some details for me:

His name is Shep, he lives in our hometown and is only 7 mo old, which is totally doable. While mom was gabbing to Shep's dad, mom let me off leash to run with him! It was magic! We ran in the water, played, birds were chirping...but then I realized all he wanted was that stupid tennis ball. I mean, helllooo, have you seen me? I'm a catch! I tried to trip him up a few times to get all his attention, but all he wanted was that damn ball. Boys are stupid. Mom said let's go, I walked to the car with her, looked back and did he even look at me, hell no, he just went back after that dumb ball.

Boys are stupid. I mean, I love a good toy as much as the next dog, but come the frick on! Maybe I should ask mom to cover me in tennis ball material? Daddy said not to worry, that in a month or so I won't care about boys anyway after we go see Dr. Vet. And he laughed. This doesn't sound good for me. Oh well it was still a great weekend and I've learned boys are stupid. Mom said this is an important fact of life I should learn and that "no means no" whatever the crap that means....