It makes her either:

A. Feel really good about our house
B. Have the need to clean somehting

While watching last night's episode, mom said "I'm so glad we got rid of any clutter we had when we redid the house!" But then as she looked at me she got a weird look on her face....

"Anna, my darling, you have have a hoarding problem...." 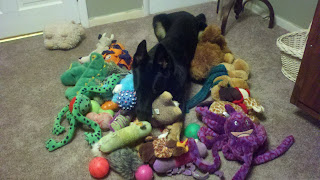 I don't know what you're talking about! 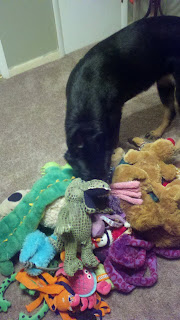 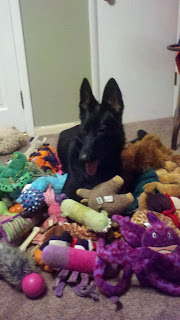 I think you're just jealous!!!

I know I'm not a hoarder! I can't even compete with Buttons who has the most impressive toy stash in the WORLD!

Mom stated this pile doesn't include my outdoor toys or the countless number of socks and underpants I run around with....pffft. Whatever woman!! Now go out and buy me something!!!!

Last week mom finally got to do something she hasn't done in a while, take a critter other than me or Simon to the Dr. Vet!! It's not something she looks forward too, but at least this wasn't because of an eye problem or a thyroid issue, it was just Dunc's old man checkup. 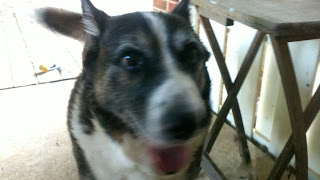 Since he's the ripe old age of 13, Dunc gets the full "Senior Blood Panel" (aka Old Fart Blood Work) done each year now. Mom always gets worried that something will show up. I tell her all the time that Duncan is fine, as long as you feed him during his pre-set feeding times, there will be no problems.

Oh well, so off they went, leaving me at home (BOOOO!). Unlike me, Dunc LOVES Dr. Vet's office. He loves getting petted and treats. Me? Not worth having things stuck up the "you know where" but he doesn't mind. 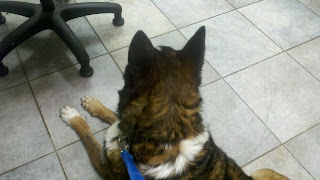 This time, they also wanted a pee sample. So mom took Dunc out front and followed him around with a tupperware like container trying to capture they "essence de Duncan". It took three times. Dunc told me it was like a fun game. Mom was not amused.

So Dr. Vet called with the bloodwork....the call mom always dreads. But Dr. Vet said he's doing GREAT! Yay!! One thing did come back a little high, and that's his cholesterol. Mom said whatever, he's 13, he's on a raw diet, what more can you do??

Looks like the old man is doing well. I think this means we need celebratory noms!!
Posted by Anna the GSD at 11:12 AM 8 comments:

The Mysterious Case of the TP Bandit

It was a nice quiet night. Crickets chirped, bugs buzzed, mom watched TV, I nomed my bone, Dunc was passed out....we were clueless to the carnage going on down the hall. 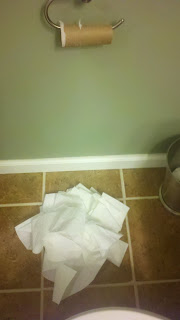 Oh, the pup-manity! A whole role of TP sat colorless and lifeless on the floor. What a waste. 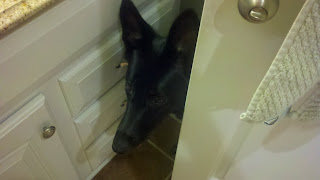 Upon hearing mom's scream I ran into Inspektor Anna action. My list of suspects was pretty slim. It wasn't me, it wasn't Duncan. It also wasn't Simon cause he was laying on mom the whole time. Alley? No way. That would require effort and unless there's noms or a twinkie hidden in the roll of TP she doesn't do anything...so that only left: Mia

Mia who has always had a TP fetish. Mia who stalks quietly from bathroom to bathroom looking for victims. 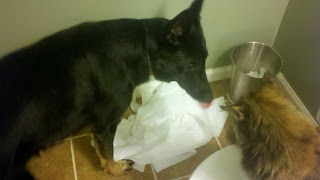 There she was, coming back to relish in her crime. I did not approve, so I went PFFFFTTTTT! at her and gave her a raspberry of dissaproval. 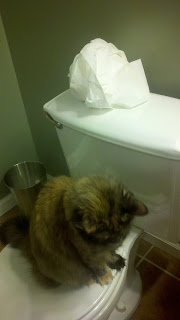 She hung her head in shame. She knew she was busted. As she tried to flee I chased her under the kitchen table and kept her in that prison until bedtime. Case Closed--Inspektor Anna out.
Posted by Anna the GSD at 8:50 AM 12 comments:

Mom got this email the other day and thought it was soooooo funny. I am not amused.

The following was found posted very low on a refrigerator door.

1. The dishes with the paw prints are yours and contain your food. The other dishes are mine and contain my food. Placing a paw print in the middle of my plate and food does not stake a claim for it becoming your food and dish, nor do I find that aesthetically pleasing in the slightest.

2. The stairway was not designed by NASCAR and is not a racetrack. Racing me to the bottom is not the object. Tripping me doesn't help because I fall faster than you can run.

3. I cannot buy anything bigger than a king sized bed. I am very sorry about this. Do not think I will continue sleeping on the couch to ensure your comfort, however. Dogs and cats can actually curl up in a ball when they sleep. It is not necessary to sleep perpendicular to each other, stretched out to the fullest extent possible. I also know that sticking tails straight out and having tongues hanging out on the other end to maximize space is nothing but sarcasm.

4. For the last time, there is no secret exit from the bathroom! If, by some miracle, I beat you there and manage to get the door shut, it is not necessary to claw, whine, meow, and try to turn the knob, or get your paw under the edge in an attempt to open the door. I must exit through the same door I entered. Also, I have been using the bathroom for years - canine/feline attendance is not required.

5. The proper order for kissing is: Kiss me first then go smell the other dog or cat's/or your own butt. I cannot stress this enough.

We have formed a rebuttle to this:

1. We are only taste testing the noms for you. In olden days royalty could be poisoned...and you are royalty to us. You never know who might try to poizon a donut or steak! We do it because we love you!

2. We don't have a stairway...so the loop from the living room, around the kitching table and back IS in the form of a racetrack. So pffft!

3. I don't know what you mean. When I fall asleep everything is fine. The kitties are quite mad you don't appreciate them aligning your neck and spine by sleeping on top of or on either side of your head. And you know we all fit fine when dad's not there...so you might want to take this up with him. He's crampin' our space.

4. I am concerned about anyone who willingly places themself in a tub of water that contains no frogs, sticks or mud. We all are. We are to make sure you make it out safely. That bathroom is a scary place. It's for your best interest. 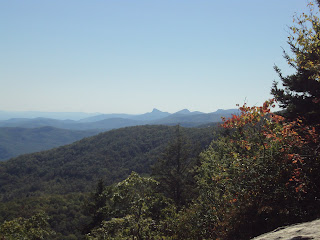 Shawnee was right! VAYKAYSHUN!!!! In 2.7 months the fam will pack up and head back up to North Carrylina for a week! Sigh...I can't wait. Here's why:

1. It will be a lot cooler!
2. I get to run around and chase things like turkeys
3. Lots of fun hikes and outings
4. Lottery tickets

Let's face it, being a loving, doting pupper to peoples can be a tireless job. We all need some time off. Time to sleep late, eat a lot of noms and sniff the deer poop. I think mom and dad are really ready too...especially dad. He hasn't had vaykayshun in a loooooong time!

Maybe this year we'll get the winning lottery numbers. Cause then we'd buy land a build a house in North Carrylina and you would all be invited to a major party! I guess I'm still wishful today! 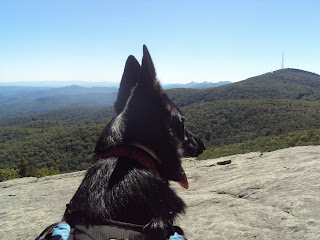 I was quite busy while mom was out of town....how busy? Busy enough for MURDER?!?! Well, I wouldn't call it murder, I call it built up appression unleashed!

In this nice grassy area, where Duncan likes to roll: 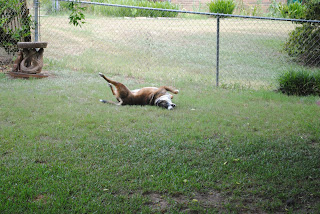 Dad found something else....a body. Due to the graphic nature (and that it was dad and not mom who would take some sort of photo) this is my artist rendition of what he found: 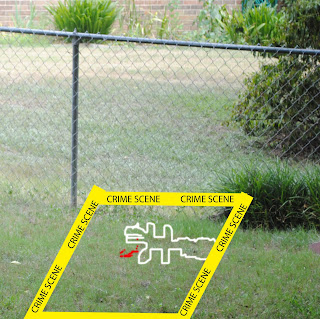 That's a chalk outline...I'm not telling them how I finally caught the evil squirrel, but it probably looked something like this: 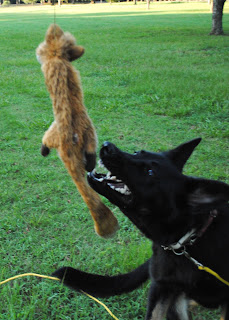 So, chalk one up for dogdom! Viva la resistance!!!