We want to thank you all for your kind thoughts and paw crossings for Alley Cat. Mom and dad made the hard decision to let Alley run free today. After improving, I guess it was just her time to go, so mom and dad let her. We're all pretty sad, but glad to know she's not suffering anymore and can sleep and nom away over the bridge.

Alley must be crying wolf! Dr. Vet said her blood work is purrfect! Said she might have tummy upset, so they're going to keep her and keep an eye on her.

Man, kitties are mean making mom be all full of worry! I hope she feels better so she can come home and I can nom on her a bit for being so dramalicious! Thank you all...mom said no more kitty posts until alley acts like a good kitty!
Posted by Anna the GSD at 12:12 PM 4 comments:

Cross your paws again, Alley is back at the Dr. vet. She hasn't eaten her noms since coming home. It's really not looking good this time...so I'm snuggling with mom on this overcast day, praying for good news.
Posted by Anna the GSD at 10:04 AM 8 comments:

Okay, I has a skeery Howl-o-ween timey story of terror to tell you! This may not be suitable for young pups or those with heart conditions, so be-ware!! This is my disclaimer and I can't be held responsible for nightmares and such....ok, here we go...


The Night the Bald Puppy Cried
It was a dark and cool night, just days before Howl-o-ween. There had been word of a dark presence roaming around the quiet neighborhood. There were tails of a monster with a giant flashing red eye that jingled and rattled chains as it lurked around...some called it the Chupacabra!
On this night, two peoples decided to take their Bald Puppy for a walkie...it was cool and the half moon lit up the sky. They laughed at the idea of a Chupacabra...HA HA HA!! They was fools! 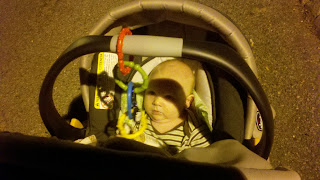 They walked past some suspicious characters...but they weren't scared... 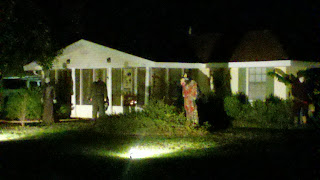 But the Wolfman, Michael Myers, Freddy and their friends told the peoples "TURN BAAAACKKK!!!"  (in a skeery kinda way) but they didn't listen, cause peoples NEVER listen! 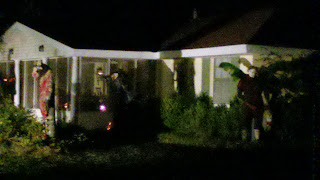 So the peoples pressed on, to the walking track...it was dark and quiet...too quiet... 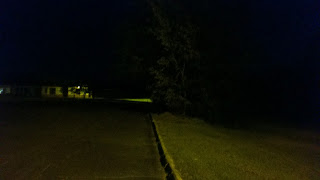 But they heard a jingling...and saw a red glowing light in the distance!! 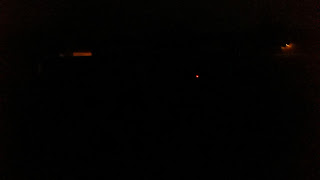 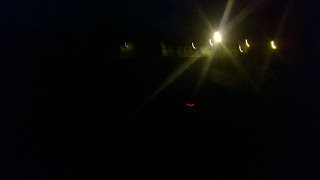 They ran and ran (okay they walked quickly), but the jingling was closer...then they hit a DEAD END!!! 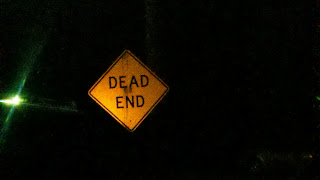 Oh no, they'll never make it! This was it!! Even the Bald Puppy was skeered!!!! And the red eyed beast was right behind them!!! 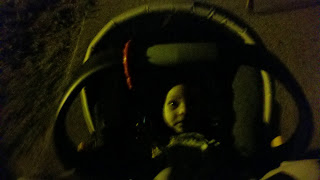 They turned and saw the red light, the paws, the claws, the tail, the muscular body, giant ears, goofy smile, diva collar and accessories...wait a minute! 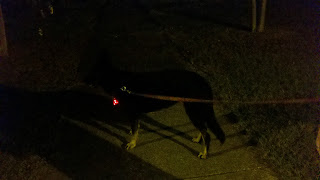 It wasn't the Chupacabra! It was the Annacabra in her trusty inky blinky light!!! Whew! Knowing they were safe, they went back home.... 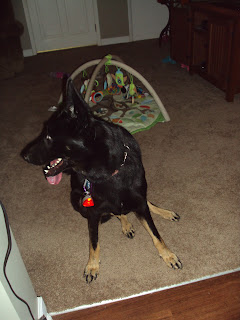 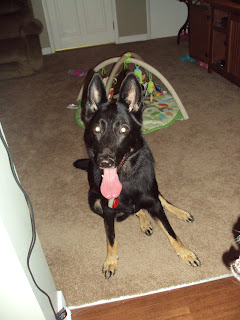 Well, you guys give yourself a paw...and a treat...and a belly skratchy...cause mom just got a SUPER call from Dr. Vet!!

He said, and I quote: “In 30 years of doing this, I’ve never seen a cat improve so drastically!”

Seems Alley is being touted as a bit of a miracle kitty at the Dr. Vet place. Which is cool, as long as she doesn't take over my Diva status there. Anyway, her kidney value was 211 Monday, which apparenlty is very very very bad, but today it was at 8!!! Dr. Vet said he even asked the tech if she broughten him the right kitty's chart!! 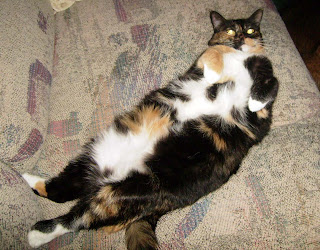 All other levels are in the normal range, she’s eating and purring. They’re going to keep her today, take out the cath and IV and see how she does in the morning, but more than likely the chubby kitty is coming home tomorrow! Whoo hoo!
As I said, Alley doesn't have much to do with me, but she's Simon's BFF and mom and dad's little chubby buddy. She sleeps right next to mom's head or on her pillow every night. Mom has been sad the past few nights since there was no Alley cat there, so I put my feets up in her face last night...she said it wasn't the same, but she appreciated the effort. I think my feets smell better than a kitty, but mom did not agree. Hmph.
So again, thank you all for the great kitty mojo!! Whenever this world gets craptastic, mom and I love coming to bloggerville, it's such a warm great place!!
Oh, tomorrow I'm going to post a skeeery Howl-o-ween themed story...Muwhahahaha!
Posted by Anna the GSD at 11:20 AM 10 comments:

Well, we got kinda good news. Dr. Vet called and said Alley's kidneys are all messed up...bad. But after fluids, she's eating again...like nomming down with a quickness. So mom and dad have decided to do a 24-hour treatment and retest to see if that helps. We're praying it does! If it does, then we'll continue it for a few days and hopefully bring her home.

Mom and dad went through something similar with Simon the same time the Bald Puppy came home and it worked for him, so paws crossed Alley has the same kitty healing mojo! These kitties sure are keeping mom and dad on their toes! Who knew that the Bald Puppy would be so much less stressful!!!!
Posted by Anna the GSD at 11:54 AM 6 comments: 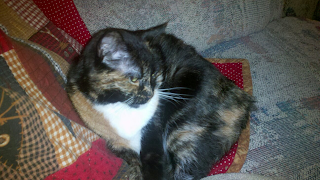 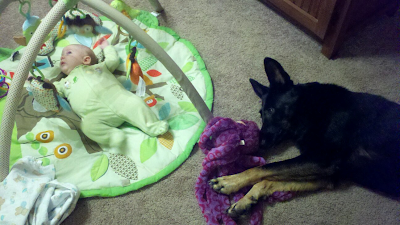 Do you remember me? When I dissappeared I was just Anna the Diva...now I'm Anna the Diva BIG SISTER!! Yes, the Invisible People Puppy arrived, so now it's not Invisible anymore, it's my little Bald Puppy!

Bald Puppy was born on Sept. 4. Mom and dad left on the 3rd (Labor Day..ha ha) to go to the people Dr. Vet hospital to be "en-dew-ced". Things went well, then the Bald Puppy got hard headed so they had to take mom into surgery!! Good thing too, cause the Bald Puppy was not only stubborn, but had his cord around his neck! Wow! But he's okay, mom's okay, and they came home that Friday and man, it's been game on since! 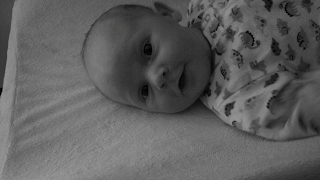 I was in Anna-sniffer overdrive since they brought him home. It took Dunc three days to even notice there was something else in the house, and since Bald Puppy doesn't give out any noms, Dunc pretty much ignores him, as do the kitties, so it's all up to me to take care of him. Thanks slacker family...

Anyhoo, I used to get really worked up when he cried, but now I'm good. He doesn't cry much, only two times at night to get his nom on, I get up with mom and keep her company. I guess that's the perk of Dunc being deaf, he sleeps through everything. :) 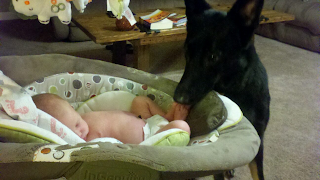 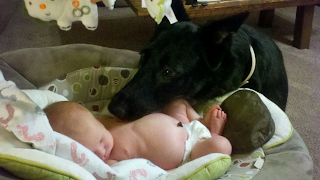 Later, mom introduced him to "tummy time" which means "on the floor close to Anna time". 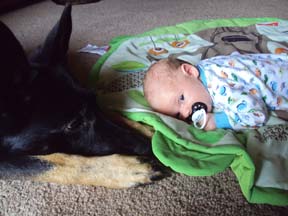 One day, he'll be mobile and mom said I can chase and herd him! Whoo hoo! Come on Bald Puppy, get a move on! 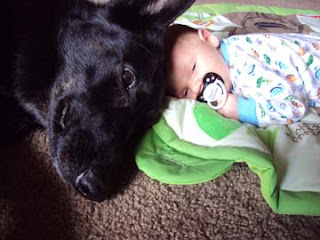 Till then, we just nap together and hang out... 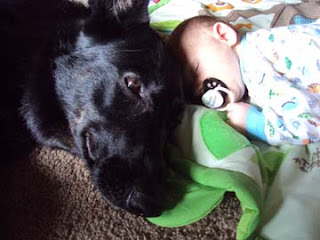 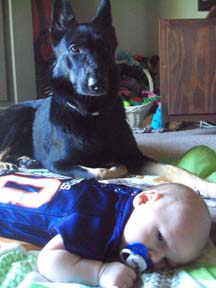 I take my role of Bald Puppy Protektor very seriously! It's a full time job, but I'm up to it! Hope you are all well, I'll try to post more often, we're trying to get into a routine as mom's gone back to work..BOOO!!!!
Posted by Anna the GSD at 11:26 AM 13 comments: