Trick nor Treat, Something is Up...

Hey all! Is you ready for Howloween tomorrow?!? I is going as my normal supermodel self...or Batman's dog. Whichever you prefer. The BP is going as a giant chew toy:

Mom says I cannot nom him, but he squeaks and everything!! And I say: You is Fuzzy! And he say: No, I be Fozzie. I is confused.

Speaking of confused, the package delivery man left something on my door that has left me quite puzzled. I thought it might be some noms or something, but it was this: 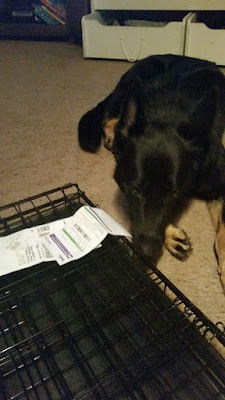 I looked over the mail label thingy but got no clues.


I'm just going to sit here and look at it and think...what does this be for? Mom said I will know within the week, then laughed. I does not have a good feeling about this...
Posted by Anna the GSD at 10:16 AM 7 comments:

But there wasn't much you could do with it, and did you know that bamboo will grow like a weed? Well, it does. And it spreads. One place here in our town was made into a park, because the bamboo was allowed to grow and get so big it made it's own forest! 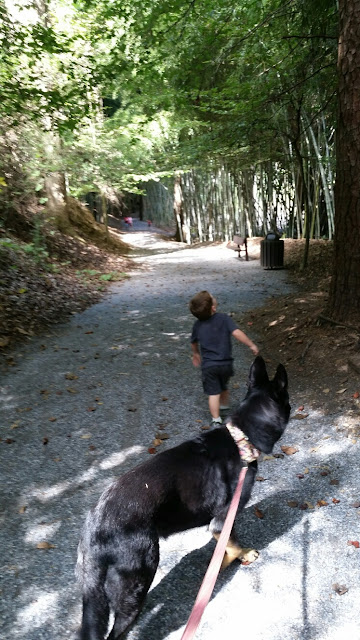 But since it's a park in the city, I do have to wear my walking string. 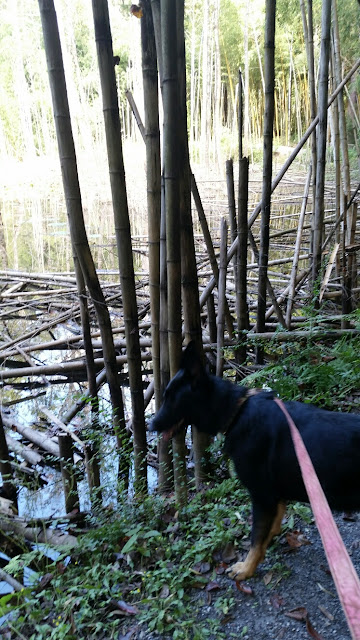 In the middle of this park is a little pond thingy full of lovely muddy muck, which mom calls "nasty" but I do call heaven. I is not allowed in the muddy heaven. 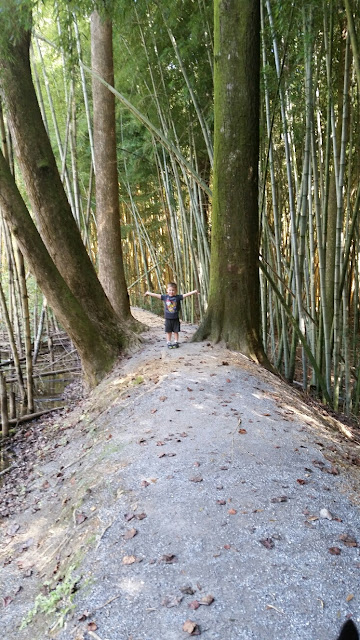 There do be some big trees in with the big bamboos. 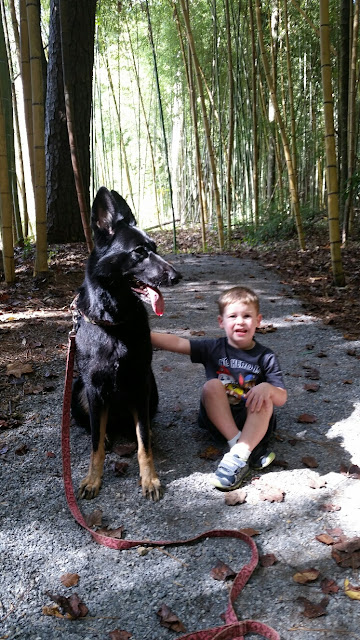 Mama said she wanted a picture of the two of us. But then she said, look like you loves each other, so I.... 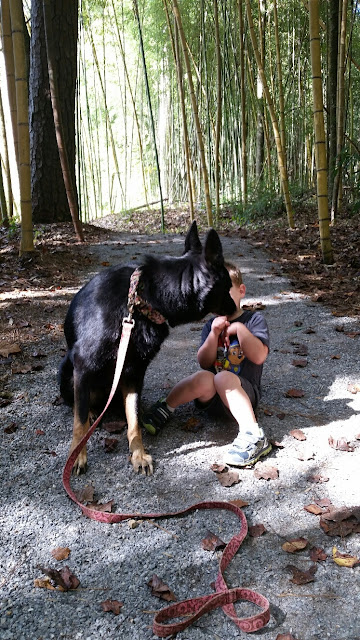 Gave a BIG ANNA KISS! BP did tell me BLECH! But you know he loves it. 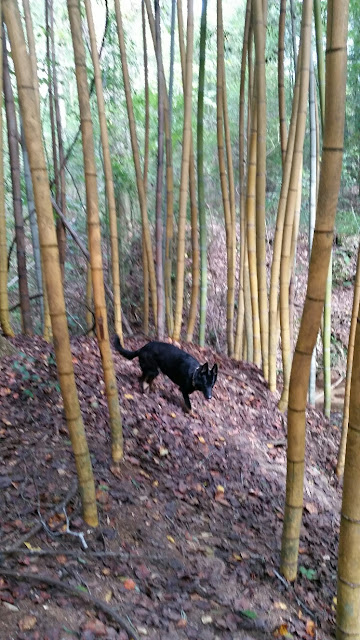 There was a stream down on the backside...shhhh....Don't tell peoples mom let me be on my "invisible" walking string for a few minutes.... 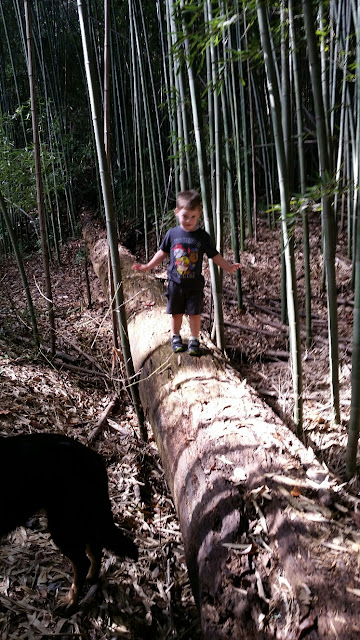 The BP did try to do some more agility work. He's pretty good.... 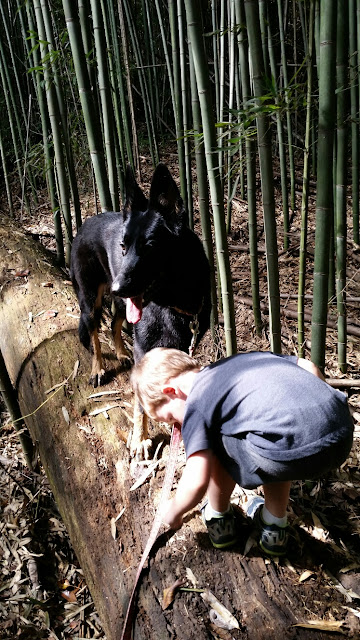 The weather here is getting cooler, which is a good thing! Sad thing is, normally we do be in the North Carrylina mountains this time of year, but we can't go because dad has gone back to school. Mom says this will be a good thing, so right now we just have to wait it out.

Anyhoo, it was a rough week, what with my Big Bro Duncan going over the bridge. So mom said on Saturday morning: "Okay everfurybody, we is getting out! In the car!"

So me, dad and the BP loaded up and mom did take us to our best kept secret, Swayback trail. We hazn't been there in forevers, so it was great to sniff around.

It had rained the night before, so dad was worried it might be muddy, but all we saw was a nice cool trail....then we came upon... 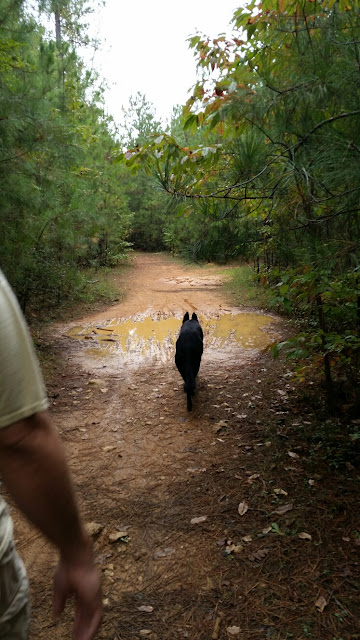 Mom and dad immediately grabbed the BP and were like NO!! So dad did carry him over. Poor BP, he gets no fun!

It was great to get out. The overcast, coolness made it feel like the mountains even though it wasn't.

These are actually bike trails that people do ride their peddle bikes on. But it's a great place for some off leash dog walking/hiking. Not many peoples know about it, but that's the best part! The BP even got some agility in on one of the bike ramp thingys.

Most of the time we saw nobody. We saw one other couple and their off leash dogs (who knew trail eddy-cut and stayed in their space and me in mines) and a family that rode their bikes through. 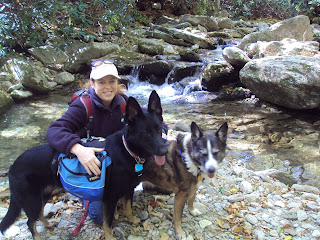 Hey everyone, Anna's mom here. I know we haven't been on here much lately (blame me, not Anna, she's perfect and all) but I came on to let so many of our blogger friends some bad news.

Last night, we had to let Anna's big brother Duncan go over the bridge. 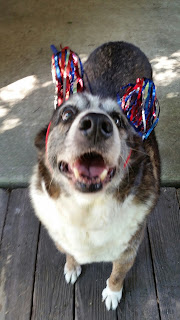 Many of you know Duncan through Anna's posts (he wasn't into all this new fangled technology so no blog for him) and the many adventures they have had together. He's been a part of the family before Anna arrived. In fact, he's been part of our lives for so long, he's seen Anna's Dad and I date, get engaged, be married and have a kid. He has been there at every stage of our lives--we were blessed to have him for 17 of his almost 18 years. 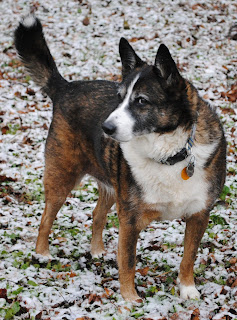 Duncan was a trooper...as $45 present to Anna's dad for Valentine's day when we were in college. He made such an impression on the staff at the shelter, that they kept him for almost a year. Then we walked in and there he was. I'd even scoped out the dogs the day before and I just loved him. Anna's dad wasn't so sure, but after tear-filled conversation at Waffle House, we went back and got him.

It was quickly apparent that he had been abused, by a man. He mistrusted men (except for my husband) and would cower if you even raised your voice. He would escape the yard, but always return, usually with a sole shoe, never with a matching pair. (I apologize to anyone in Sylvian Springs who only has a closet full of single shoes). He chased horses, swam after ducks--he was living life. 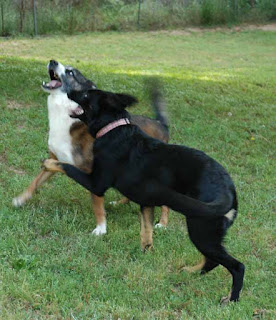 Through his time he was there when my first Dalmatian, Jasmine, passed. Was there when we brought home our Dal Maggie--then the kitties Simon and Alley. He was there when Maggie died unexpectedly from a stroke or embolism. It was because of him we got Anna--we had to find something to help him out, he was depressed alone. 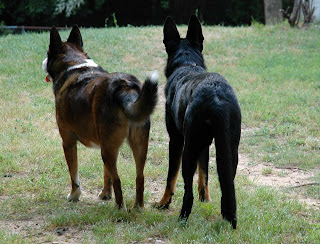 At first Anna drove him nuts, but they became peas in a pod, whether he liked it or not. He's had the sand between his toes at the beach. He's climbed and viewed off mountains. He's been swimming in the ocean, lakes and streams. He's eaten god knows how much food and enjoyed every bite, although he probably never actually tasted it as it was inhaled. He visited the elderly in nursing and assisted living homes as a therapy dog. He could be petted for hours and although he never learned any tricks, other than a half butt sit and shake, he always brought smiles to faces. 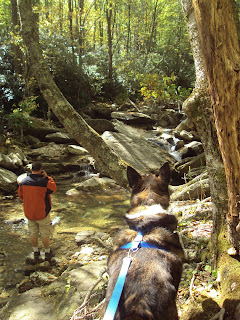 We never knew what he actually was. Some sort of shepherd-collie mix is the closest we ever figured. It was always interesting to hear people tell us what they thought he was--he was even called a wolf on several occasions. 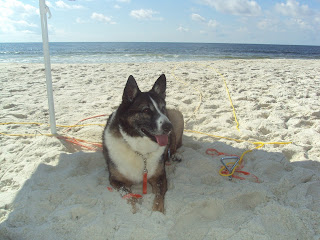 Most days, he just liked laying in the sun, rolling in the grass and chilling out. The only thing he got excited about was feeding time--which he would promptly remind you of--even in these last few months, you never forgot it was time to eat. He'd still try to play with Anna--much slower and mainly just barking at her as she ran around him. What I loved about him, is he didn't know he was old--the world just went quiet and things moved slower, but inside he was still vibrant, full hearted Duncan. 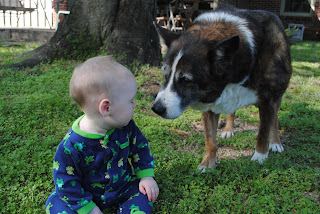 He was doing pretty good yesterday, the normal. But that night we knew something was wrong. he wouldn't eat and, as any pet parent knows, you just knew. We called our vet, explained and met them at the clinic within the hour. In that time he went downhill a bit more. His systems were slowing down--nothing was wrong other than time had finally caught up. We made the decision to let him go peacefully. I stayed with him as he drifted away, the end of an era in our lives. 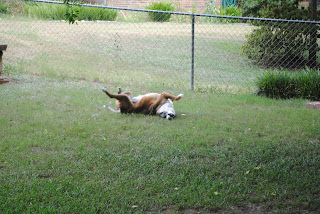 Anna knows something is up--she's a little clingy and a little mopey. The boy has no idea yet. I'm telling him today after work. He knew something was wrong last night, wanting to "help" with Duncan and wanting to make him feel better. I let him give him a hug and kiss before he went to bed. He didn't ask about him this morning, but today I'll have to explain to a 3-year-old that his dog is gone, and it's killing me.

Thank you all for being a part of our family--even virtually. I'll try to be a good parent and let Anna get back on here more!