It's officially summer, but of course that means summer began like a month ago here in Alabama. It gets all kinds of hot and hoomid, but we just learn to deal with it.

Normally, mom and dad would play with me and the hose, but this year, we have a new Sprinkler Anna Cooling system, I call the it The Boy2000. 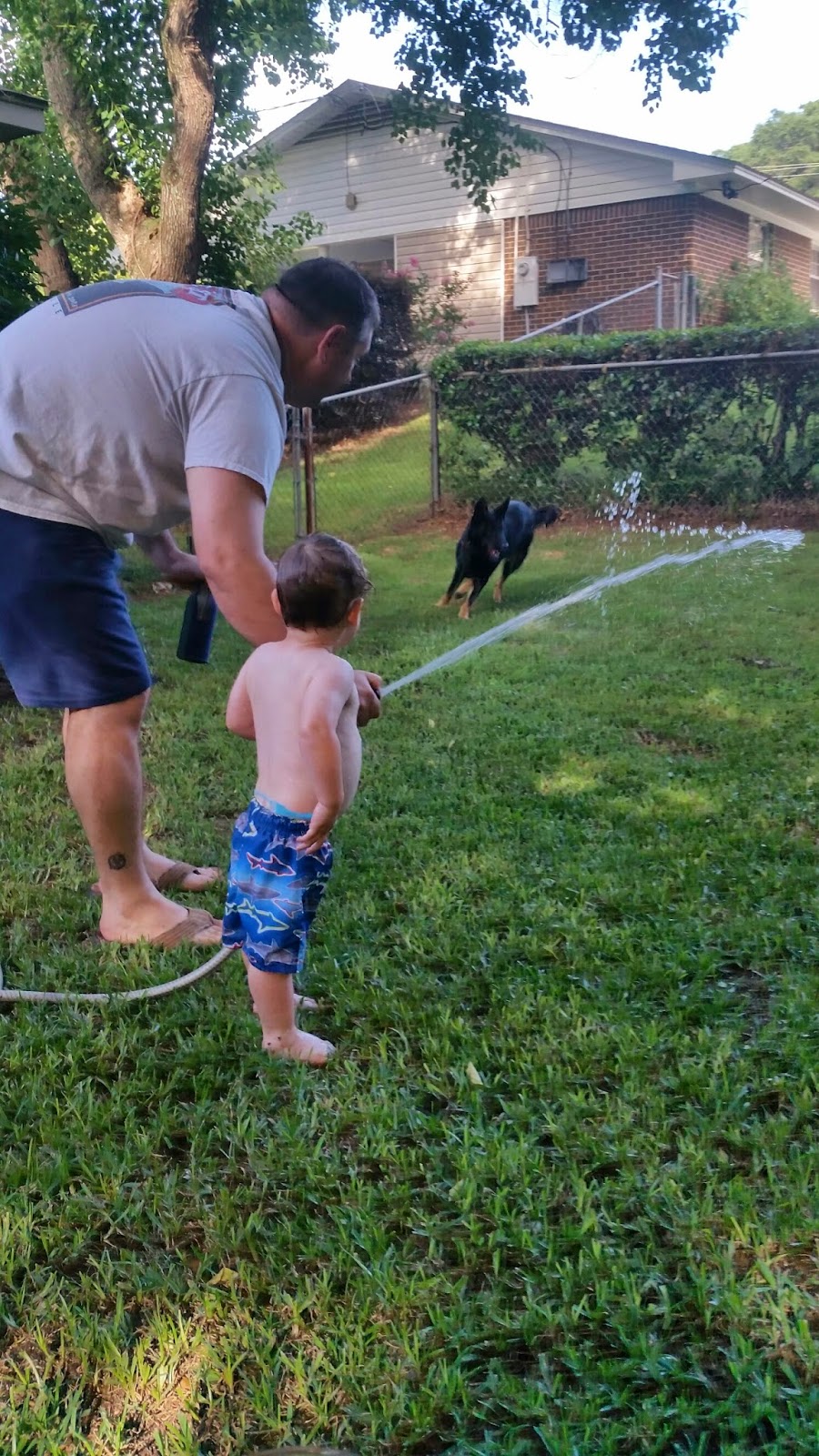 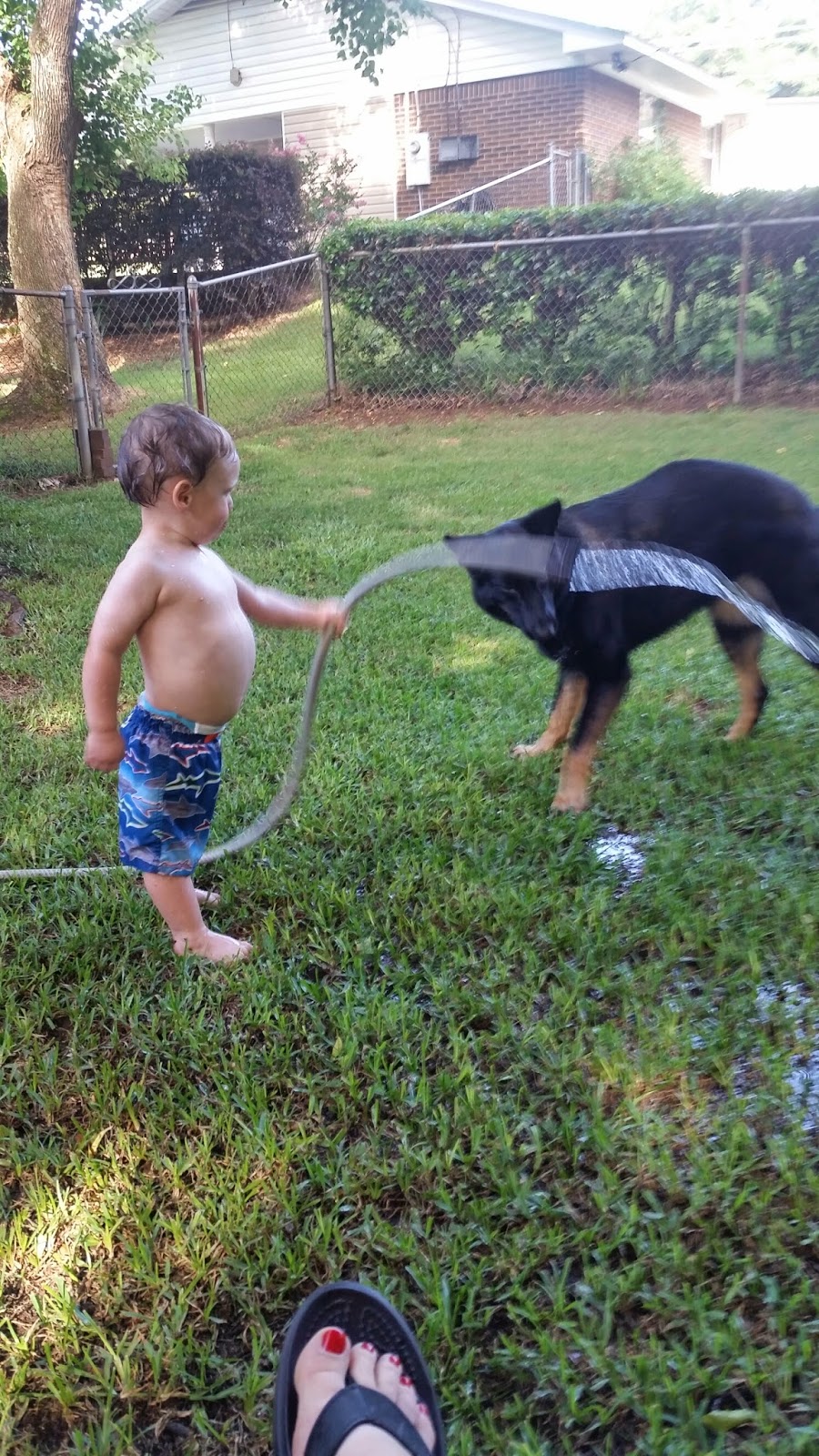 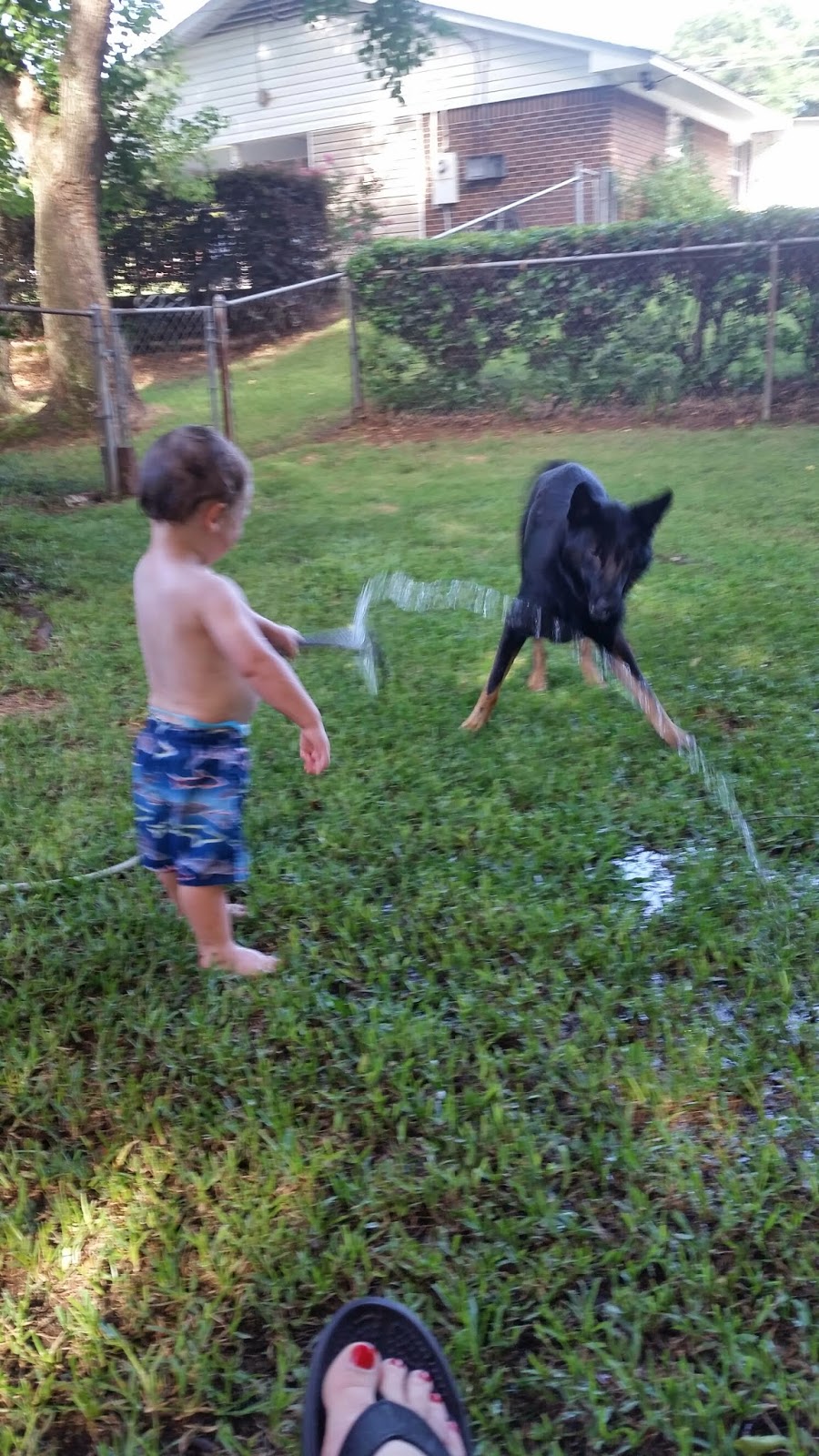 He did so well, you can see the Mom's foot as she sits back and watches! 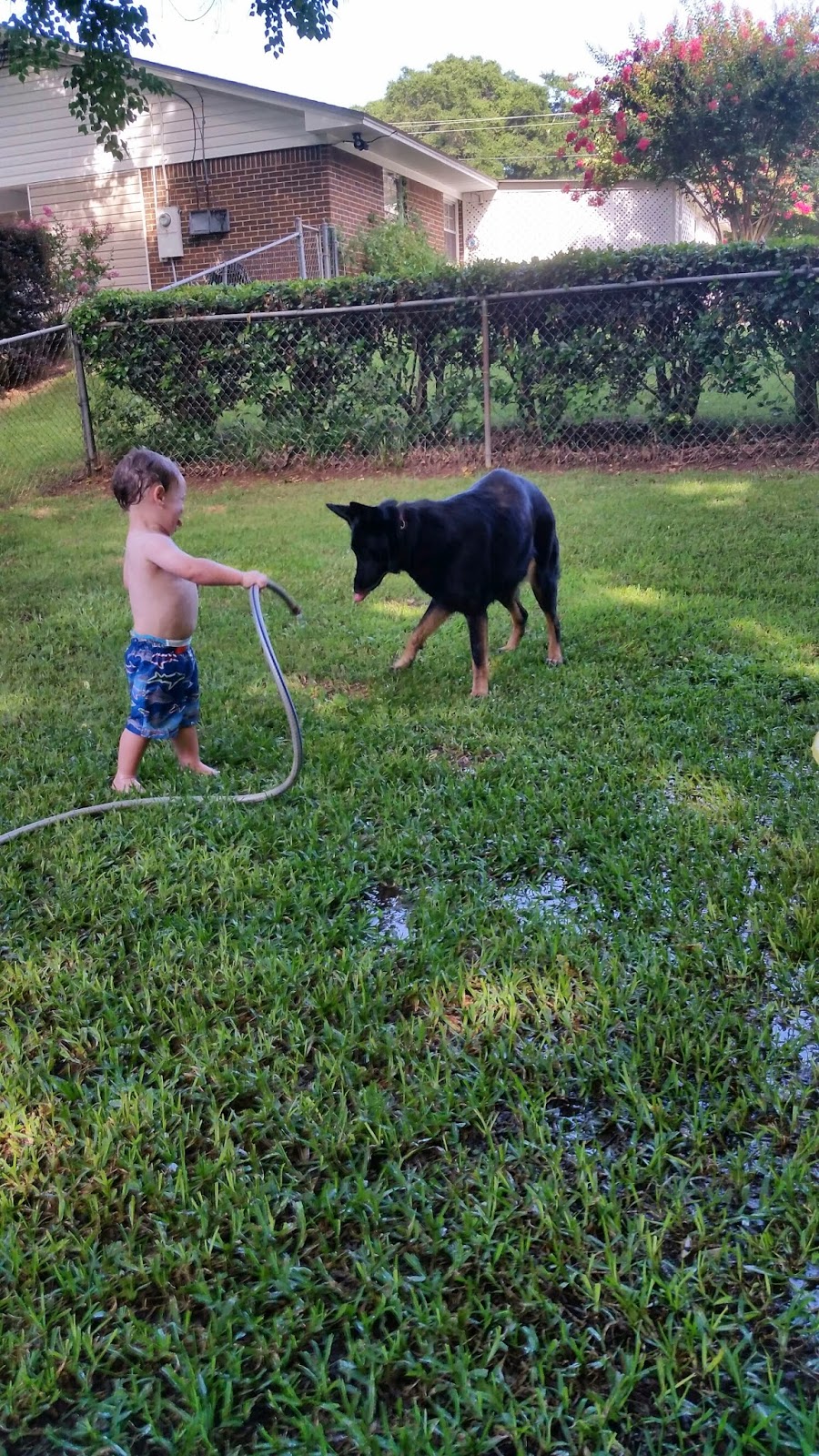 Want to see my skeery water bitey face?? (I know it looks mean, but I was no where near bitey face with the Boy2000) 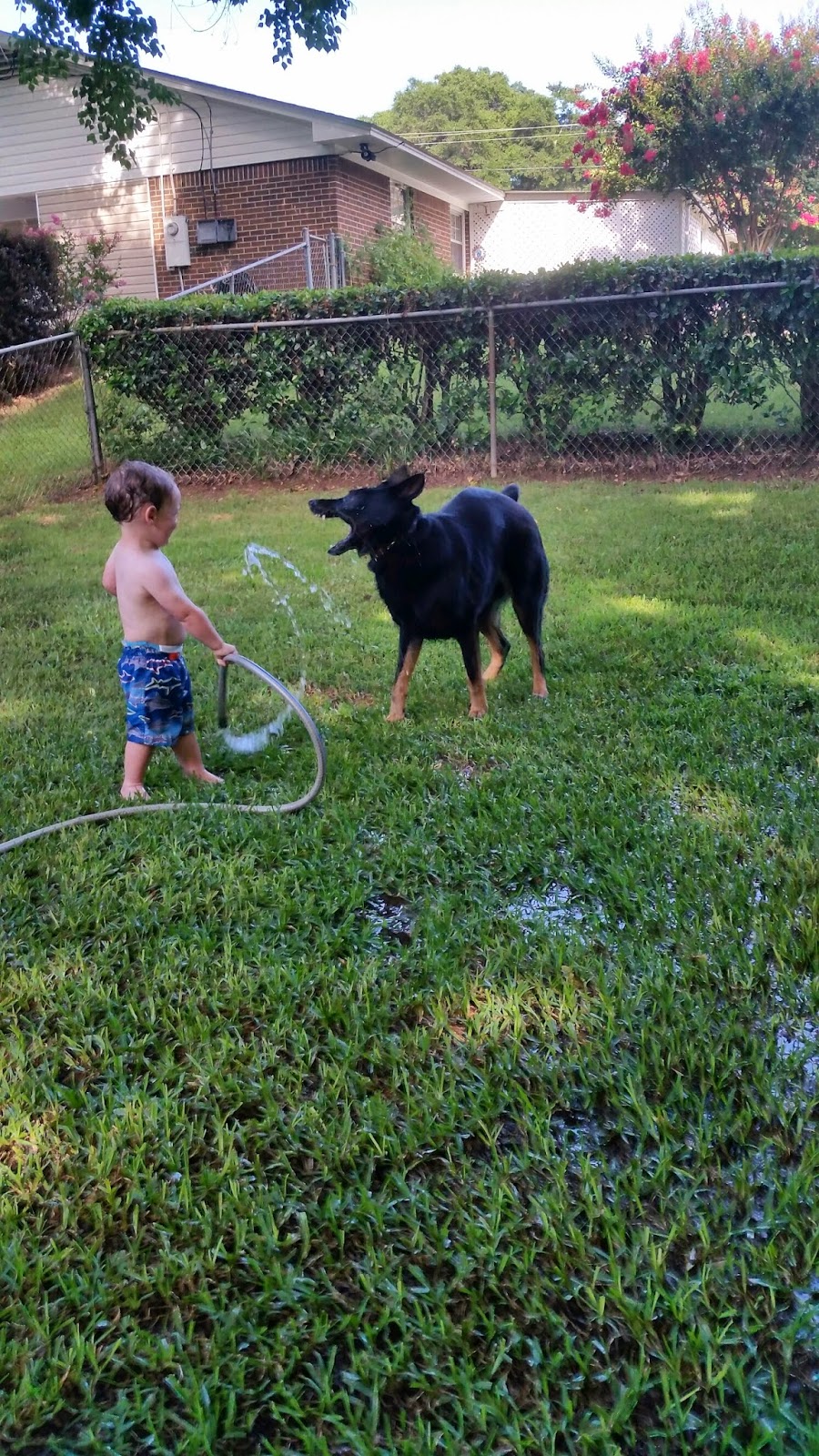 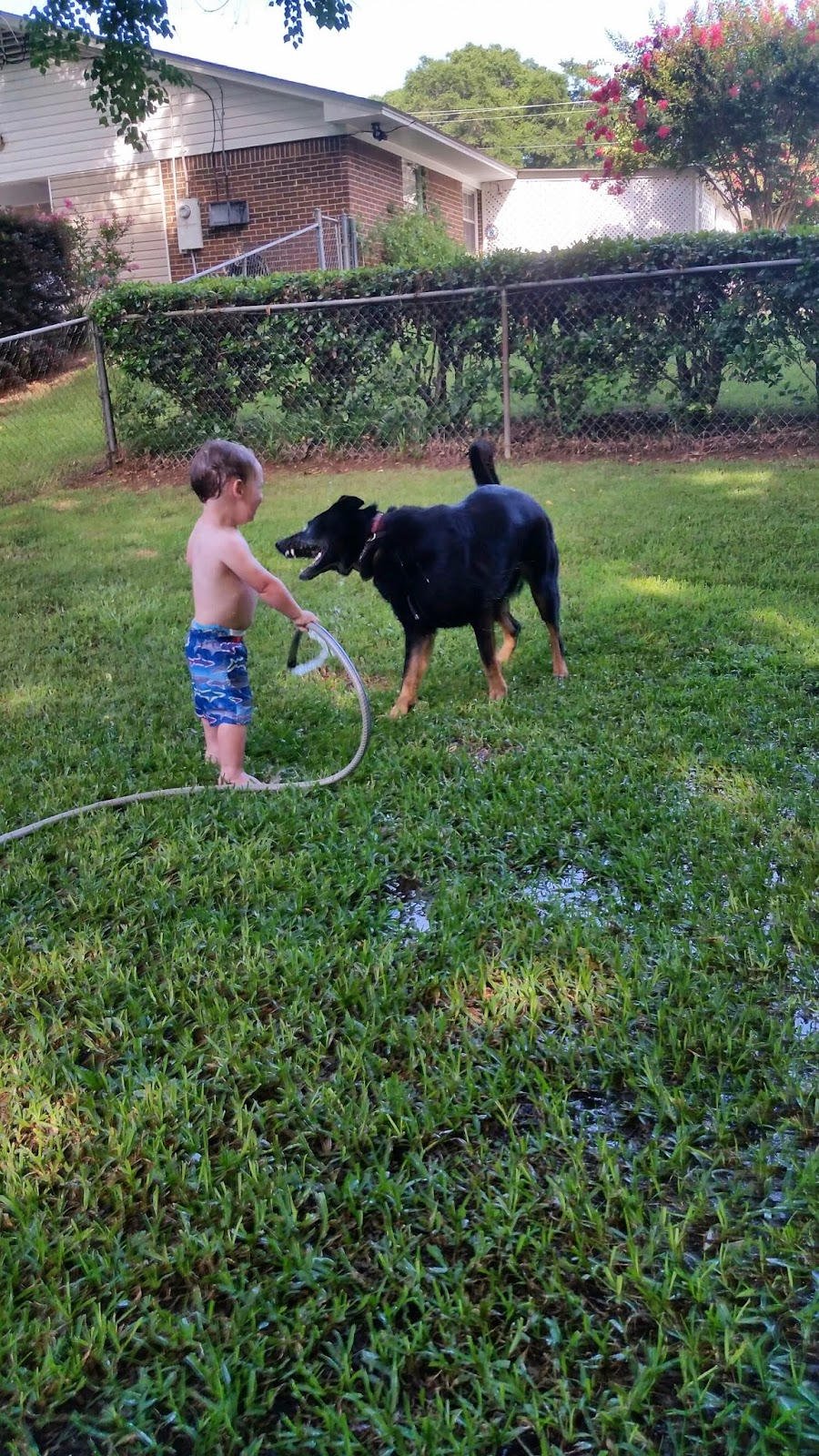 It was a great time! The Boy2000 giggled and laughed a lot and we both stayed cool! Super Win!

So, since I haven't posted in like 2 years, it's TBT is a great time to catch you up on stuffs! Today I'm catching you up with the Old Man aka Duncan and some medical stuffs I think all doggies and their parents should know. 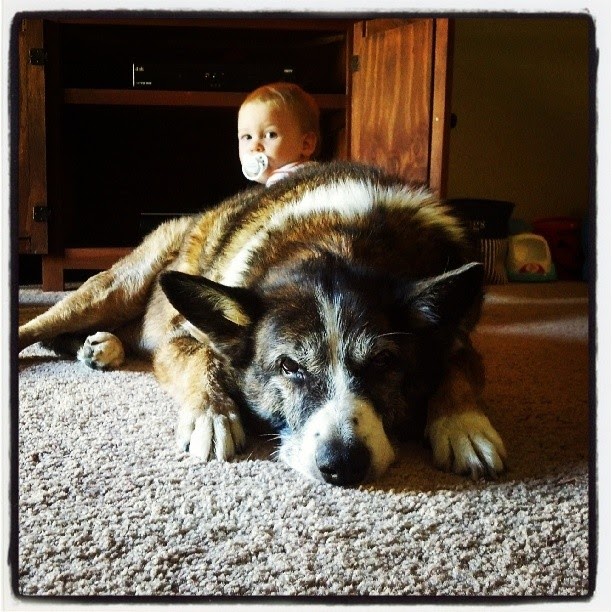 As I mentioned earlier this week, Duncan turned 16 this year. Not only does that mean he can drive now, but it does also put him the the Super Duper Senior Category. Part of being in that category does also involve having some "health scares" to freak out the parents. We had one big one in the last year and I'd like to share it with you, cause the symptoms were quite scary (but ended up not being that scary, so it's okay) and for something not a lot of people knows about, but you need to knows if you have an Super Duper Senior Dog.

Last September, we made our annual trip to North Carrylina for vacay. It was great! Duncan only made it out on the trails around the cabin, but he still got out and did good for an old fart. Mom called him the "Jack Lalanne of dogs." I have no idea who that is, but I guess Jack sleeps, poots and eats a lot? 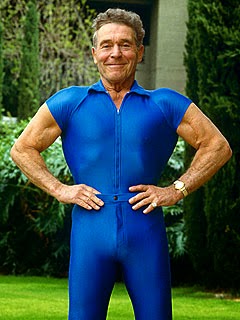 Anyhoos, we was having a great time. Dad noticed once that when walking up a little hill, Dunc got a little wobbly. He mentioned this to mom and mom was all: "Oh, I'm sure he's fine, just a little winded from walking up that hill." and he did seem fine after that, so we went on vacaying. 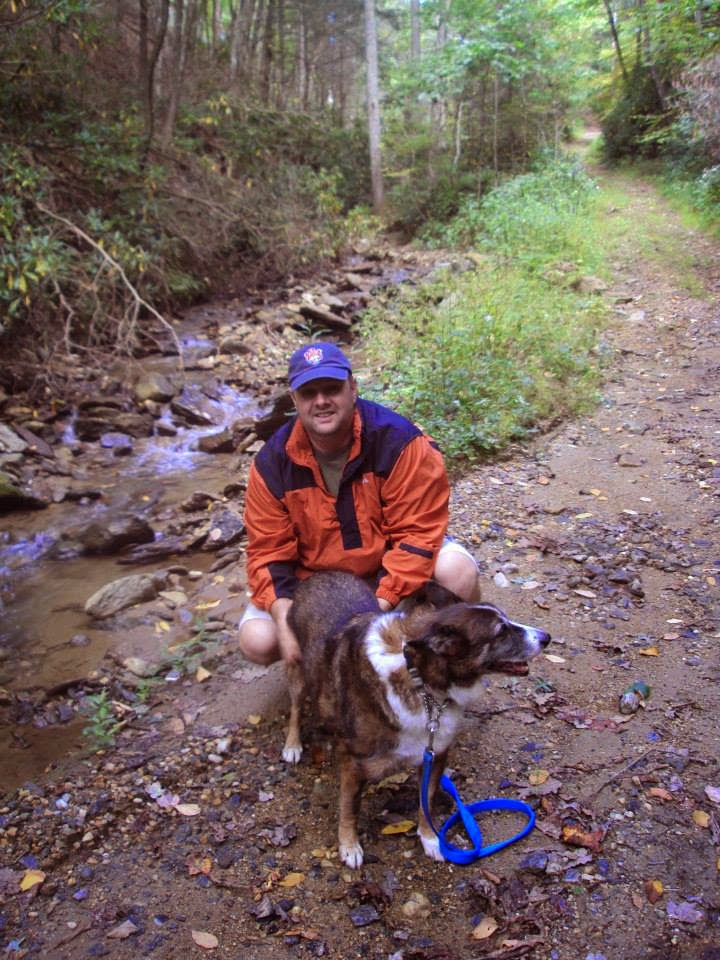 Before we left the last day, dad took me and the old man for a power-potty walk. Mom lagged behind with the Bald Puppy, and when she caught up with us, Dad was like: "Have you ever noticed if Duncan looks down when he's walking, he gets wobbly?" Mom was like "No" and so they watched him and he didn't do it again. So they were like, okay? loaded us up and off we went.

About a few hours in, we stopped in South Carrylina for a potty break. Dad went to get us out of the back of the car, mom to tend to Bald Puppy in his carseat and dad was like: SOMETHING IS WRONG!

Duncan couldn't stand. He'd just fall over and his head was tilted to the side. It seemed like a whole side of him was parylized. He wouldn't eat or drink (not eating scared the crap out of mom), he couldn't keep his head still and he was drooly. So here we was, in the middle of NO WHERE with a bad-off Duncan. Mom and dad decided to keep going and the best thing to do was to get home. All they could think of was a stroke. Mom instantly got on the interwebs and looked up "dog falling over" and found that all of his symptoms were perfect with Canine Vestibular Disease.

Canine Vestibular Disease is also known as Old Dog Disease, which is kinda fitting. It seems that something does go pop or bad in the ear canal which makes the Old Dog all dizzy and wobbly and seems like everything is going round and round and round. Mom said it must be like vertigo on crack. We stopped a few more times, and mom was able to get Dunc to drink, but they had to help him stand to potty and stuffs.

It seems that this goes away on it's own, but mom still got him into Dr. Vet the next day, especially since Duncan wasn't eating. Dr. Vet said this is very common in old, larger dogs and it typically happens in the Fall. They have no idea what causes it, but she gave him some anti-nausea meds. Another sign of CVD is the dog's eyeballs do go side to side quickly and their head is tilted. Now, Dr. Vet said even though she was about 95% sure it was CVD, it could also be something very bad like a brain tumor, so she said do the "wait and see" approach and see if this went away on it's own. It went a way in like 5 days and Duncan was normal as he can be! He began eating cheese on day 2 after the Dr. Vet visit so those anti-nausea meds must have worked.

Sometimes the dog can be left with a head tilt, but Duncan was fine. His head is a little crooked anyway. He had another quick case of it about a month ago, it only lasted 2 days and mom and dad knew exactly what it was this time, and even though he still ate he did get pukey once so they gave him leftover anti-pukey meds. 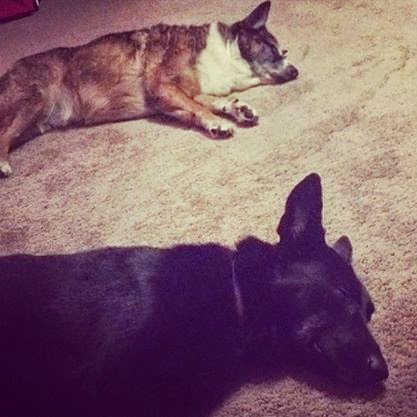 Also, for his b'day, mom did get Duncan a Quarter Pounder with Cheese. Duncan nommed that in like 3 bites! Mom says for 17 she will get him like a whole happy meal!

I still has so much catching up to do, but today I'm starting off with the latest and greatest news--we has a new family member. My super secret clue was the name of my ball-island friend in yesterday's post! I is sooooo sneaky! Internet/bloggy friends, meet Winston! 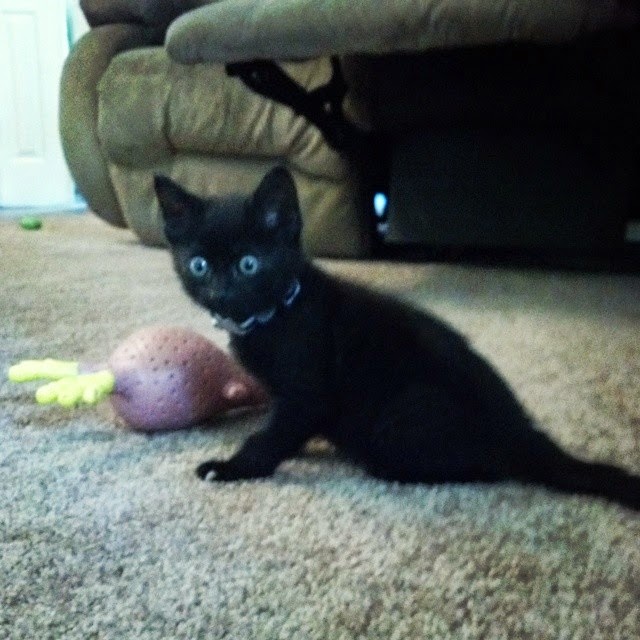 Now, let me tell you how we got Winston. It was a story of joy, tears, drama and love. See, at Mom's work there do be some not so friendly, non-people liking kitties (Mom calls them ferret or furral or something like that). Well, most of the ferret cats have gone, but apparently there's still one somewhere, because mom's coworkers found two little ferret kittens outside. One, they could not get  which was gray, and a little black kitty that was wanting inside. I think he was saying "I WANT NOMS! I IS STARVING!!"

So the nice office ladies tried to find him a home. Now, mom knows that dad has a new, strict "No more cats" rule, even after Simon and Alley passed. He said Mia kitty was enough. But mom said something was special about this little guy. So after some sweet talking, mom convinced dad to let her foster the kitty until she found him a forever home. Mom disclaimer: In all honesty, this was my goal!!!

When they brought the kitty home, the Boy LOVED IT! He even named it: Cat. He and Cat became like BFFs! 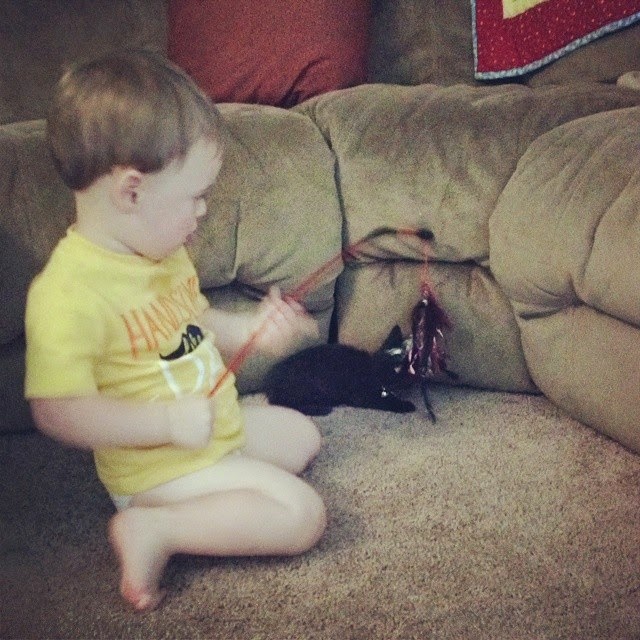 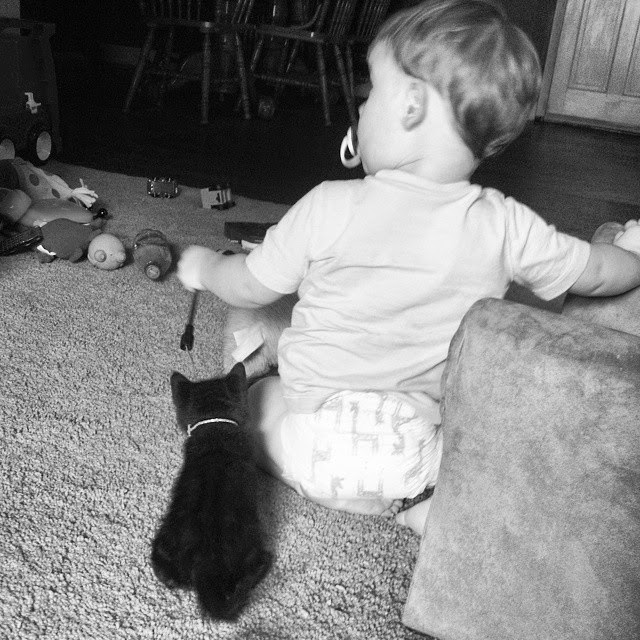 After seeing how good Cat was with the Boy, mom got on Operation: Keep Cat. She did try to find Cat another home, but everyone just kept saying "Why? He's found one!" Mom was like yes! Dad was like NO!

Me on the other hand, well, I just wanted to play with Cat, but apparently mom said since I'm like 500 times the size of Cat, I was intimidating. 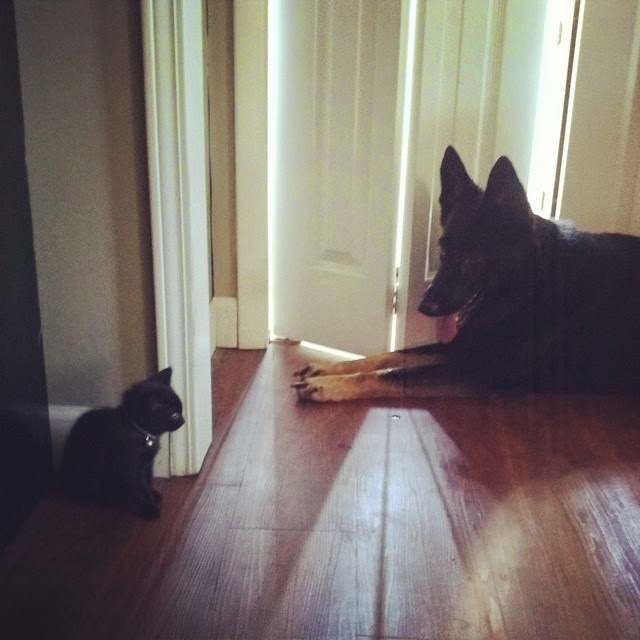 So like a week passed, and this last Friday night Dad in his all serious Dad voice said: We have to find Cat another home. It cannot stay here. It will end up just staying here and we'll end up keeping it and I know that's your goal.

I was like, holy crap! Dad knows of mom's scheme?!? I thought dad's were pretty oblivious to the ways of moms, but apparently he found a handbook or something, cause he flat out called Mom out on her plot.

So then mom began all: I know, but I really want this cat. It reminds me so much of Simon and I miss him so much..

Mom (with shiny wet eyes for effect): But I want it. It's so good with Boy!

Dad: I don't ask for much, I just don't want another cat. I'm sorry.


And it was over. Mom was prepared on Monday to really really really push to find Cat a new home. On Sunday, mom, boy, Cat and me was hanging out waiting for Dad to get home from work. It was also mom and dad's wedding anniversary (12 years! Holy Snausage!). Dad walked in with some beautiful flowers and then said: That's the rest of your present, happy Anniversary. See what mom got: 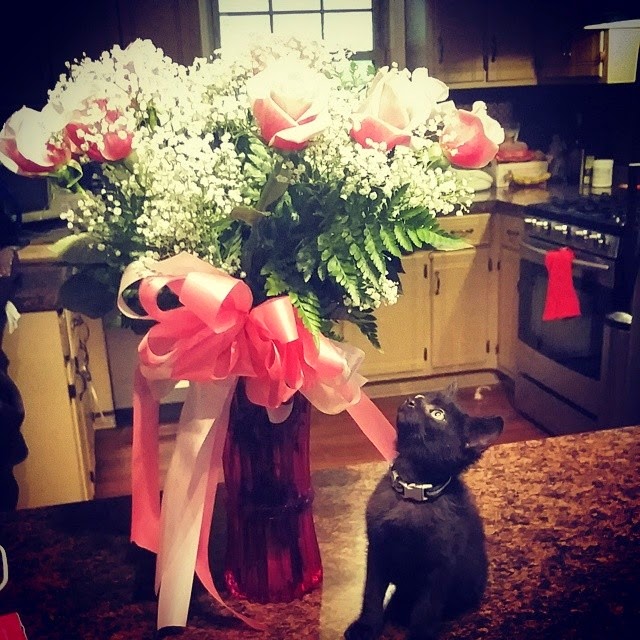 We got to keep Cat!! Yay!! Mom and boy and Cat and I were so happy (and deep down, Dad was too, he likes to play with Cat, why do men have to be so weird??). Mom said she was renaming Cat to Winston, although Boy still calls him Cat from time to time.

So that's how I now have my new BFF Kitty. He does remind us a lot of Simon, but Winston let's me play with him and I slobber all over him! Welcome to the Blog Winston! 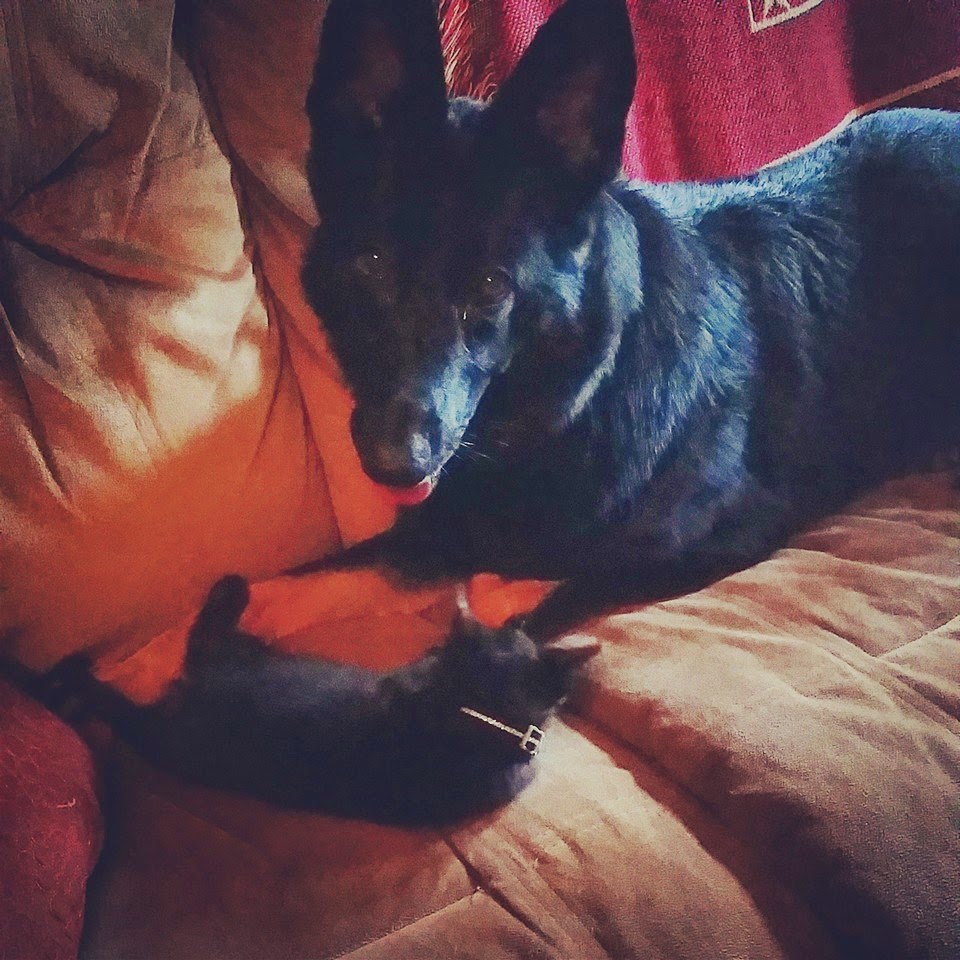 So, umm, yeah. You know that movie where that mailman gets on the big flying car/plane thing, then it goes all BOOM! in the water and he is left on an island and all he haz to keep him company is a ball named Wilson and he's gone for like FOREVER but he decides to chance it, meets a whale and makes it home and everybody is happy ever after?


Well, my long absence is just like that, minus the plane, and the island and the whale. But I'm pretty sure there was a ball involved... 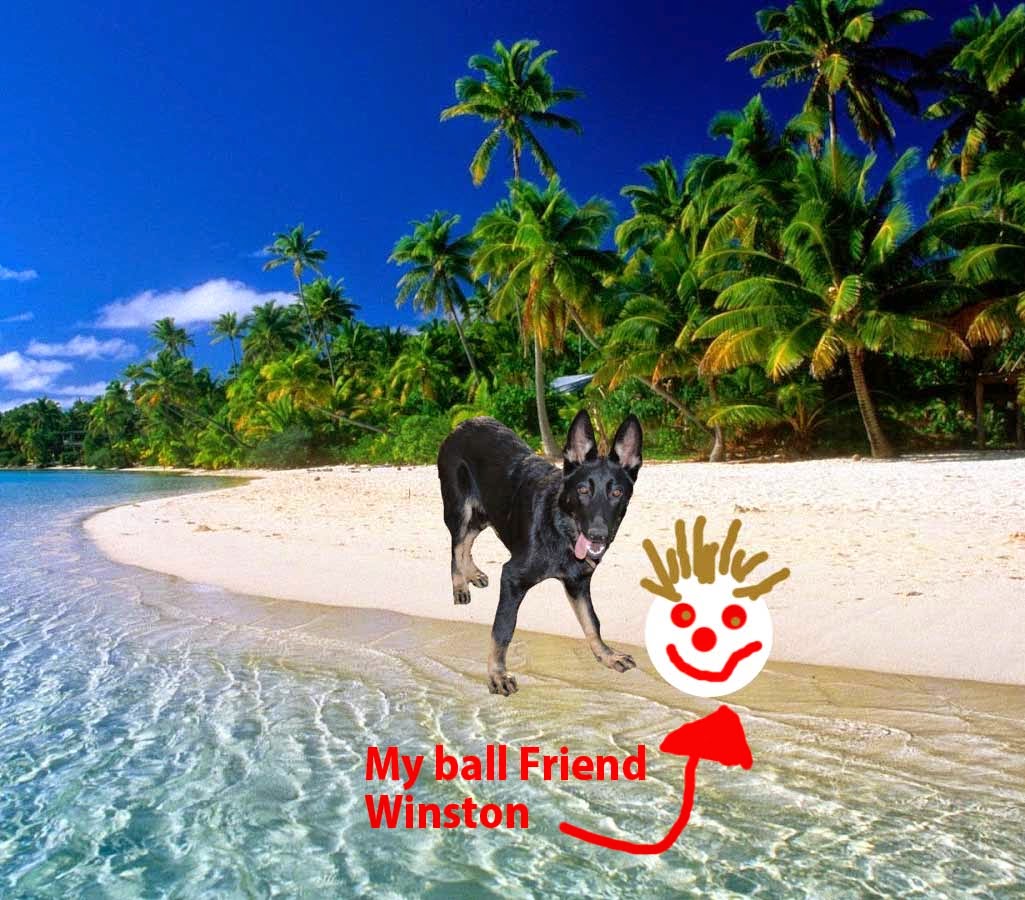 I'm back. Don't ask why I hasn't been around. I honestly couldn't tell you, I was stuck on an island, remember? Let's go with that. A lot has happened in the last (gasp) almost two years, so I'll give you a top three run down. If any of my friends is still out there, know that I have kept up with you, but I didn't have a keyboard on the island. I've seen some friends we've lost and we has been sending hugs and prayers to their families.

1. Bald puppy is a much larger bald puppy..with a little less baldness. 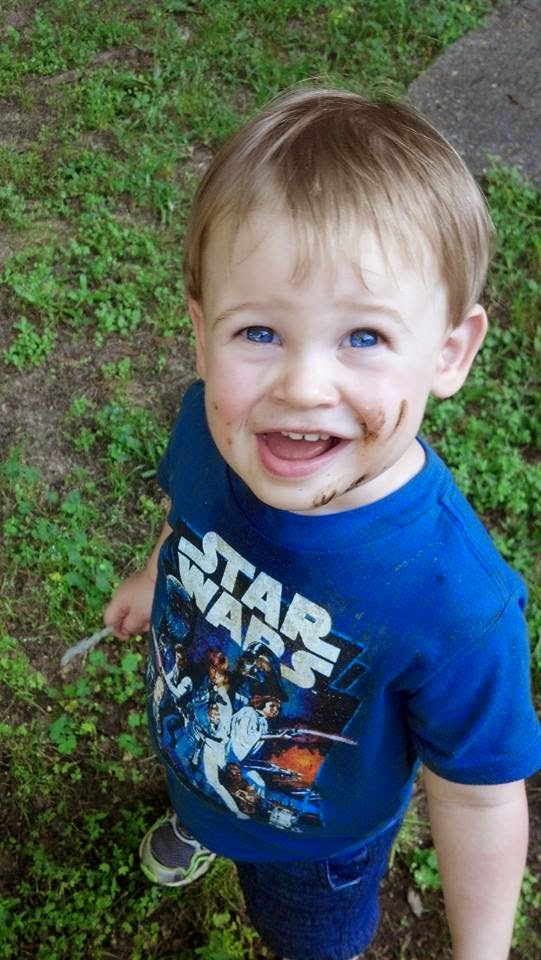 But he and I are still BFF! FOREVER! We has all kinds of shenanigans we get into!! And he can kinda talk, which makes it interesting to say the least. 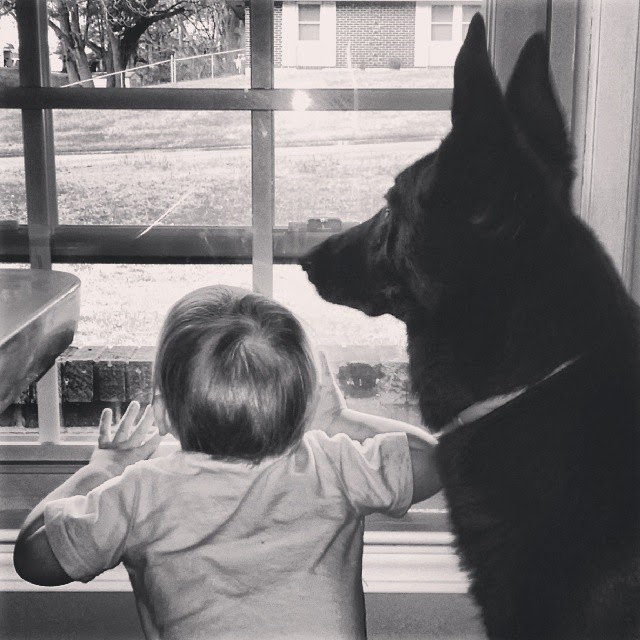