So the other night I'm out doinf my nightly patrols...I check the per-im-eter for bad guys, possoms, kitties and frogs. Usually I just find frogs, which I chase around and paw at until mom does that blasted "leave it" thing (I've got to break her of this habit, it's crimpin' my style).
But Monday night I found something freaky. I was sniffin near the end of the patio where the evil froggies tend to hide out near the fortress of doom (aka my kiddie pool) and my sniffer sniffed something weird. So of course, I jump back and get into super-puppy-ninja-investigation mode--which means I was sniffing with my neck and body all stretched out so I could run at a moments notice.
I finally found what I was sniffing...it was this weird alien bug thing....like this:

...but it was dark out and it was freaky as hell. I tried to warn mom and dad about the alien by acting like a spaz, mom finally got the flashlight and spotlighted this creature. She called is a "see-cay-duh". Then they laughed at me for warning them through my spazy behavior. I was going to just let the alien bug eat them, since they mocked me, but I had to go back to sniff it one last time...I inched closer...stretched out a bit more...one more step...and then, for the first time, I really wanted to eat mom.
She thought it would be funny to sneak up behind me, grab me and go "Boo!" It scared the holy kibble out of me. I swear, if my butt hadn't closed up I would have pooped on her. I jumped like a foot in the air. She and dad thought this was HIL-ARIOUS. I'm so going to eat the crotches out of all their underwear...that was totally uncalled for!
Now just the shell of the see-cay-duh is left and I finally got the courage to touch it with my nose yesterday. Then last night, I found a green see-cay-duh and chased it around the yard...it just went EEEEEEEEEEEEEEEEEEEEEEEEEEEEEEEEEEEEEEE! at me which I thought meant it wanted to play, then it stopped, and I ate it. The end.
Posted by Anna the GSD at 10:35 AM 5 comments: 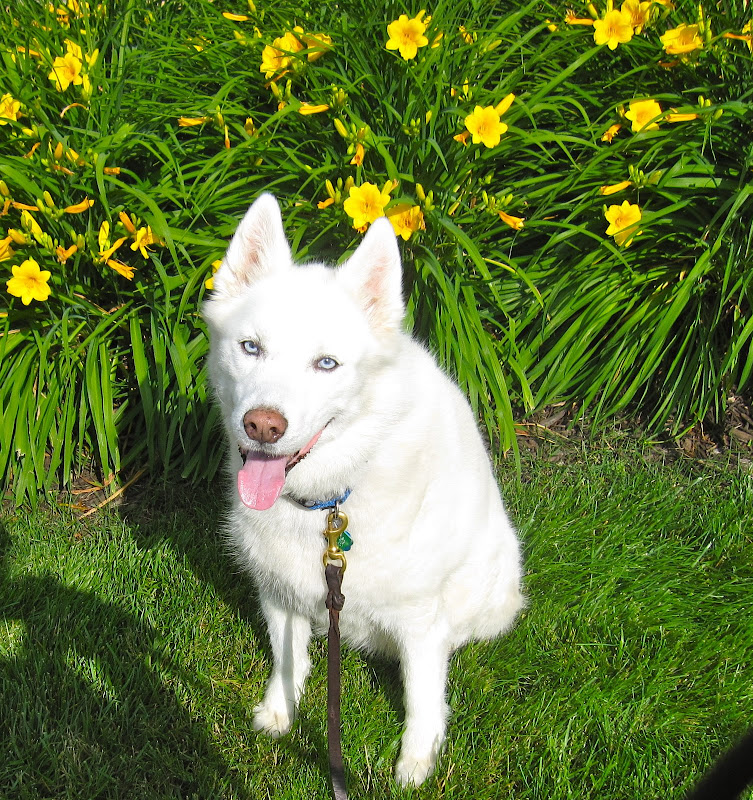 I just found out my friend at Chronicles of the Woos, Dakota has passed on. I feel bad for Dakota's parents but know that Dakota is running free with no pain. If you can, please say a puppy prayer for Dakota's parents and her siblings Phantom and Thunder.
Posted by Anna the GSD at 10:04 AM 3 comments:

So this week has been not too monumental. It's been hot, I've laid in my kiddie (or puppy) pool, chased my fox on a pole and taken it easy. Dad's been gone all week but he comes back today and I'm super excited!
Yesterday mom accidently said the "D" word (aka Daddy) and I got so excited I jumped off the bed and went and waited by the door. But no daddy. Mom said she was sorry. I gave her the stink eye and told mom she was a heartless woman and the only way to make it up was to give me Chiken!
Anyway, I did get to go to work with mom this week. She felt bad for me not having dad so Wednesday she took me to her office. I really like her office. I usually just chew on a bully stick or take a nap. I get to see all kinds of people who tell me how pretty I am (duh) and how well behaved I am (keep it comin' people) and that I'm such a smart girl (yeah, it all goes to my head...I'm a diva).
I don't get to go to work with mom all the time, but I've probably been up there like five times. Mom thought it would be cute to try to recreate a picture of me now at 9 months and a picture of when I was up there at three months....can you tell a difference??

Mom says she loves when I come to work with her, that she actually gets more accomplished.
Well, that's about it. I'm just here anxiously awaiting dad's arrival. I'm going to slobber all over him tonight and model my new collar for him! He hasn't seen it yet! Have a great weekend!! 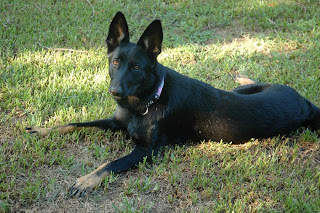 I have a new activity! Mom calls it my "chase/teaser" pole. I don't know what it really is, but it's AWESOME!
Mom went to Tractor Supply (where she also found my JollyBall for dirt cheap, just a little FYI) and bought a horse whip, some nylon twine and a Skinnez Fox and since she's the McGuyver of dog toys, rigged up a chase toy for me. She said it's to work on my prey drive, but all I know is it's fun.
See, mom gets the fox thingy on the ground and I chase it! Then I squeak it. Then mom says "drop it" and we start again! I wish it wasn't so dang hot outside so I could play with it more,but mom said my "targeting" is really good and that I'm FAST. Of course I'm fast, I'm the Annabear of Speed! I also like to jump after it, I go flying through the air like a bird then CHOMP! Catch the fox!
Here's some pics of me chasin' da fox. Sorry they're blurry, but I'm just too dang fast for the camera! Engage super-sonic puppy speed! 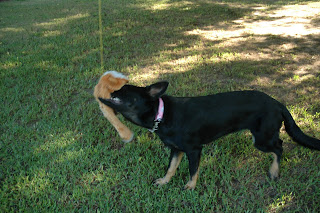 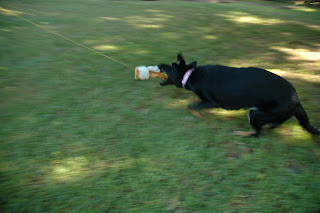 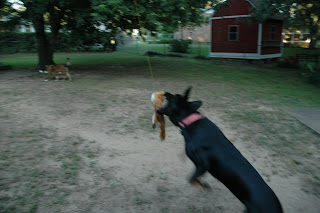 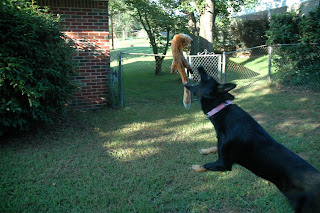 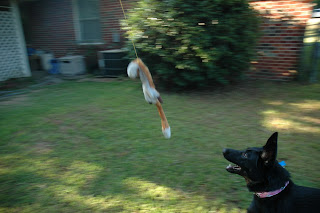 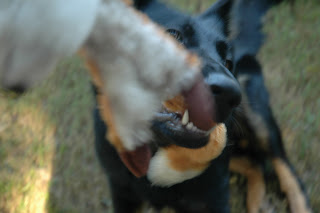 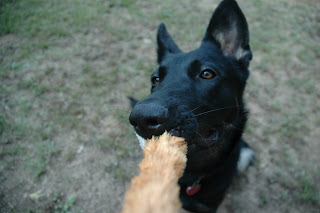 I have yet ANOTHER new collar!! It's so fashionable! But mom said it also serves a purpose.
See, I've suddenly become a "spaz" as mom calls it, at PetSmart. I suddenly do NOT like the floors in PetSmart. They're like super slick for my giant puppy paws. It makes me uneasy. Seriously, if you were trying to walk on butter, you'd be uneasy too.
Anyway, so at our last trip, I learned a new trick, I can back out of my collar and run free, through the parking lot and back to the car! Mom was not as entertained by this trick as I was. Well, now that I figured it out, it's game on! I can go or not go where I want! FREEDOM! Muwhahahaha!
That is, until this package was delivered yesterday:

In that little white box was my new collar. I love collars, but should have known something was up when Simon, the head kitty seemed so thrilled by this box's arrival. I now have three including this new one. At first look I was like Oh! Me Likey!!! It's soooooo diva!

Pink camo and skulls? Wicked cool! But then something is different about this collar...Mom said it's called a martingale and I cannot back out of it! So there goes my new trick! I guess I'll HAVE to go where mom tells me to go now. If it wasn't so cute I'd be quite pissed off, but it's cute...here, I model for you!
Oh no! Bombarded by the Pup-a-ratzi!!!

Okay, here's my good side (who am I kidding, they're all good sides!)

Okay, so I can't back out of this collar, but I do really like it! It's so hard to be a diva!

Moral Support at the Vet

Hey puppers! Well I just got back from going to see Dr. Vet! And nothing happened to me! Yay!

Mom said it was time for Big Bro Duncan's "annual exam" and that I needed to go for moral support. So we loaded up and off we went.

I actually like seeing Dr. Vet. There are so many things to smell and people and puppies to see. Oh, and they have doggie biscuits. And they give them away for FREE! I don't have to do any tricks, they just give them to me. Pretty awesome, no? Maybe mom could learn something from them.....hmmm....

Anyway, we get in the room and they take Dunc out of the room. I did NOT like this. We go together like gravy and train, we're not supposed to be separated. So I waited patiently by the door. Mom said he would be back, I didn't believe her, but who knew, she was right! He came back.

Then Dr. Vet walked in. Of course he couldn't believe how big I've gotten (I'm 59 lbs today and 9 months old on Sunday!) and how shiney I am and what white teeth I have. Then I sat with mom while Dr. Vet and Vet Assistant lady poked and prodded Duncan. He just stood there with that silly grin on his face. Duncan just likes to be touched or petted in anyway, so he was in doggie heaven.

Dr. Vet then said Dunc was in perfect health for his age. And then I realized, how old is Duncan? Dr. Vet and mom said they're not sure since mom and dad got him from the pound 8 years ago and he was already an adult...Dr. Vet said he'd guess around 10-11. Duncan later told me they're all wrong and that he's 9, but he's milking the old man stuff for all it's worth.

So after a few more pets on the head we got out of there. Mom said we may be going back to STAY at Dr. Vet's when she and dad go to Missouri (where ever the crap that is) in a month. As long as I'm not near some crazy yippie barky Mc. Barky dog I might be okay with this...I'm not sure...I'll have to think about it...
Posted by Anna the GSD at 10:11 AM 3 comments:

Wow, sorry! I've been gone for like a year in dog years! But I've been to Africa! Well, not really, I've actually just been chillin and hanging out.
But PaPa's friend does a lot of hunting stuff and while visiting him and Granny a few weeks ago, him and mom took me up to see some of the animals! It was CRAZ-EE!
I saw some BIG kitties...like kitties I shouldn't mess with!

Then I found this deer thing...it smelled yummy!

And I met what my kept calling my "relatives". I don't think they look near as cute as I do! And why are their ears so small??

I figured since they were "family" they should share that bone...mom said no and did that dang "leave it" command. Ugh I wish I could make her forget those words! :(

We saw bears and all kinds of stuff. My sniffer was in overload! It was a really neat place, I want to go back!

And since I couldn't take the bone, or ant-ler as mom called it, she got me my own! This thing rocks! I'm still chewing on it! I let Duncan chew on it too...it may take a while to get this thing gone! Which makes mom happy!

Other than that I went to the creek last weekend...and mom's taught me a new trick! She'll try to get some photos for me so I can tell you more about it!