Who knew? I learned this the hard way. On Friday mom, dad and the BP left with some towels and stuff and said they'd be back.

Hours later they did come back. I kept listening to hear tank noises, but didn't. I walked in and found this:


Turns out Panzer is actually my new puppy brother! What the what?!?! It's all starting to make sense now. 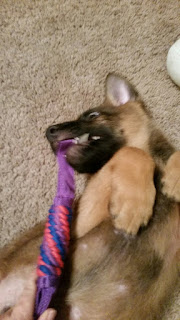 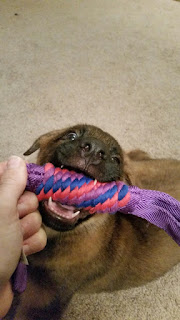 Mom says he will be a bit bigger than me, but I'm like no way! He's all knees and elbows!

Mom and dad said it's my job to help raise this little puff ball into a proper GSD.

So far he has done quite well with the poop and peeing outside thing.

He's even tried to make friends with the kitties. Winston is all "whateves" and Mia does her "WHY ARE YOU LOOKING AT ME!" stare of disdain. So, normal kitty behavior.

He's fun, we has played tug and stuff this weekend, but I tell you that puppy do sleep a lot!

So far we do think this little guy is a perfect fit. The BP does love him too. We'll see how this adventure goes! So Bloggie friends, meet Panzer!
Posted by Anna the GSD at 9:02 AM