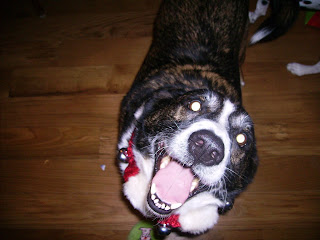 Mom here, I'm hijacking Anna's blog today (with her permission of course) while she runs around like a freak with Rebel.
Today to many people is a romantic holiday--Valentine's Day. For me, today is more than that, it's the day we got one of our heart dogs--Duncan. 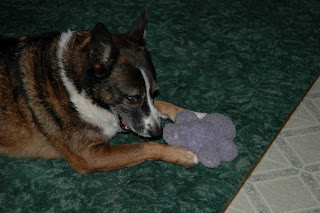 To start out, I was in college and my husband (then boyfriend) had been dating for two years. Animals had always been a large part of my life, we've always had a dog, a cat or two and countless numbers of hamsters and god only knows how many fish. My husband, on the other hand only had one dog growing up. I found that terribly sad, so for Valentine's Day, I arranged a scavenger hunt of clues that ended with him getting in the car, blindfolded and I drove him to the local Humane Society. 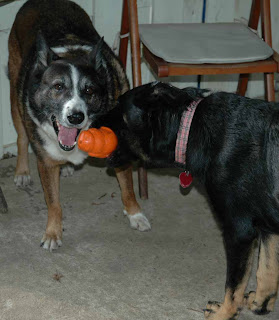 We walked in and he looked at the puppies, and then to the adult dogs. There in one of the runs was this adorable little 1-2 y/o shepherd/collie mix that was just smiling and running in circles (little known to hubby, my girlfriends and I had scoped out the H.S. the day before and really liked this fella!). 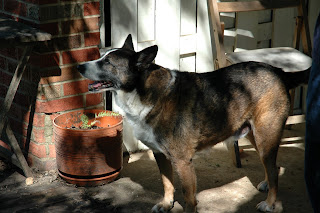 We asked to have some one on one time with him in the yard to see how he did. His name was Duncan. And as soon as Duncan got in the yard on that rainy day he ran straight from us to one of the HS workers who was smoking outside. He had NOTHING to do with us, but adored this guy who just petted him and kept on smoking.
Needing to think about this, we left and went to the local IHOP with a newspaper looking at classifieds. Hubby said he really wanted a puppy...but it wasn't puppy season and there weren't any in the paper. Thinking my Valentine's Day present was a complete bust and that poor Duncan would be left at the shelter I did what any girl would do--I lost my shit. I started crying and babbling in the middle of IHOP about how I was sorry he didn't like my present and that I really thought he would like that dog that ran in circles and BOOO HOO HOO! 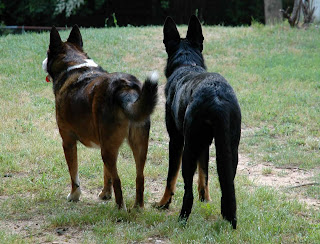 Stunned, hubby said "no no, it's a great present, let's go back and get that dog"
We went back and decided to take Duncan home. When we left all the shelter workers were coming and hugging him and ooohing and aahhhing over him. That's when we found out he'd been there for almost a YEAR! This was a kill shelter, but no one could come to putting this dog down...it was fate. It also explains why he cared more about the smoking worker dude than us, and also why when he got out of his collar on the way to the car he RAN BACK to the HS!!! 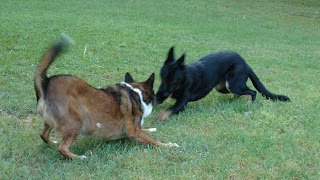 Through the next year we worked on Dunc and his issues. He'd clearly been abused by a man at some point in his life, and it took a year before we gained his full trust. But he was so sweet. He loved to be petted more than anything. He looked after Maggie Dog when she was a puppy and was terrified of Simon. He would get out of my hubby's yard and go steal shoes from the neighborhood bringing back only one of a pair.
In the 10 years we've had Dunc, he's made countless friends and is "the man". I've had people try to buy him from me (seriously...WTF?) and he's given back to the community through visiting nursing homes as a therapy dog. He mourned the loss of Maggie and is teaching Anna the ropes of how to be a great dog. He chases things out of the yard and would protect me in a heartbeat. He LOVES car rides and food. He knows bedtime is at 10 p.m. and no later or he'll just go to bed and leave you. He snores like a 90 year old man and will not go outside if it's raining, and has the bladder of a camel. 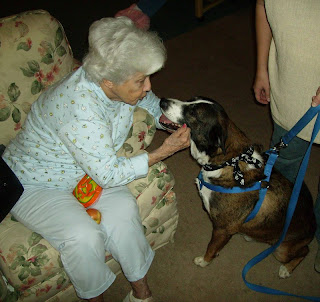 Duncan is the best Valentine's Day present ever. For his Birthday he's getting a whole cornish hen and lots of belly rubs. Even though he's starting to slow down, he's still the best dog in the world. I hope and pray I have many more birthdays with him. Happy Birthday Duncan Dog! We love you! 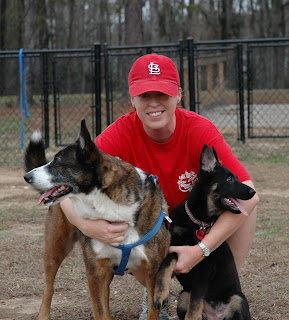