Anna's Believe it or NOT!

Welcome my friends to an episode of Anna's Believe it....or NOT!!

I pose to you two very odd pieces of photographic evidence from this weekend....
Case 1:

In a certain house are several critters. Most go along with their day to day activities. But there is one critter, the wiley Alley Cat, that is anti-social and makes devil noises from under the bed (at least at me...and Mia).

Expect the shock and suprise when Mom walked into the bedroom, flipped on the light and saw THIS: 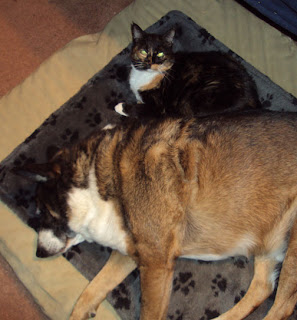 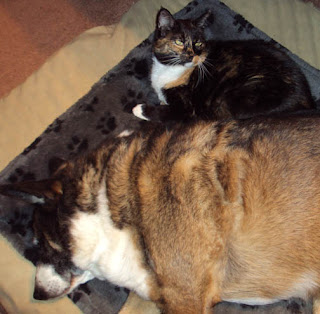 Yes, that's Duncan and Alley sleeping TOGETHER on Dunc's dogbed!!! The gray mat on the bed is a self heating mat, and apparently they both really like it. Alley was there first, then Dunc walked in. Normally, Dunc is scared of the kitties and won't go near them but he really wanted to go to bed and Alley wasn't going to move, so what happened next was unbelieveable! Dog-Kitty peace!!
Case 2:
Dad got a new phone last night....he got modern and is now 3G whatever that means. Dad was playing with his new phone and not giving me noms last night. I gave him the stinkeye...didn't work. But then dad took a photo with his new phone, and the phone revealed that it's not just stinkeye I give! But secret message laser-beams! The laser beam is saying "GIVE ME NOMS!!!"
He was so freaked out, I got noms. Go laser eyes!! 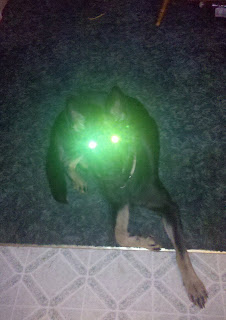