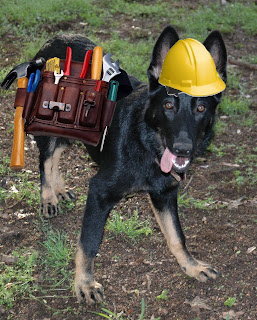 I thought today I'd take some time to show you the bathroom makeover that I've helped supervise.
Here's what our bathroom was: 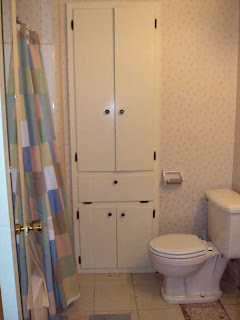 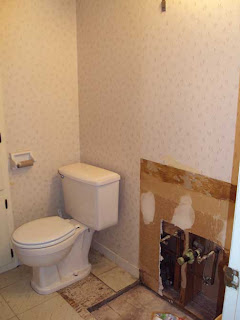 The toilet was very close to the wall...oh, and as you'll notice in photo two that we had no sink. Apparently there was a water leak and in what mom calls "Dad's manly rage" he removed the sink...three years ago. Anyway, the plan was to remove that cabinet thing and go into mom's closet and add about a foot to two to the bathroom and go into the spare room closet to make a new closet for the bathroom. Got it?

So, mom and dad began demo which seemed like a lot of fun. Mom karate kicked some walls down and we were left to: 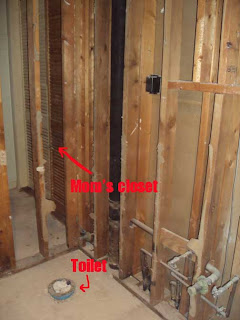 I pointed out mom's old closet, they planned on going into it making more room by the toilet (see, if they just went potty outside they'd have tons of room, but mom said this would be ina-prope-re-ate and would probably lead to the cops coming to take them away). The pipes for the sink look basically the same as they have for the last three years.

Papa came down Tuesday to help "put up walls" then dad put up some more yesterday and mom helped when she got home from work. I have to admit, I had no idea what the crap they were doing, but when I went in for my inspektion, it's all starting to come together: 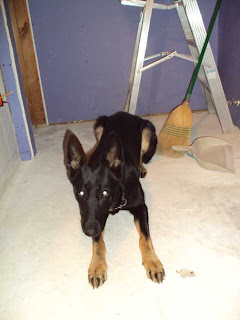 Behind me to the left is the NEW closet and I no longer have a secret passageway into mom's closet, there's a wall now. 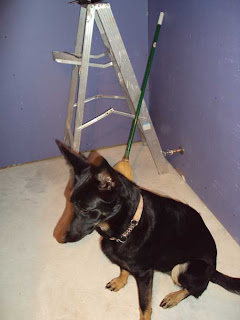 They passed my inspektion. And I have to say, thanks to mom it's a very clean work space. I almost dedukted points from them because of the color, but dad said it's because it's moisture resistant sheetrock and they'll be painting it, we won't have a purple bathroom.

Next week, some guy is coming to show dad how to "mud the walls". Now this is something I know about! MUD! But dad said it's not that kind of mud. I'll have to see what this new "mud" is about.