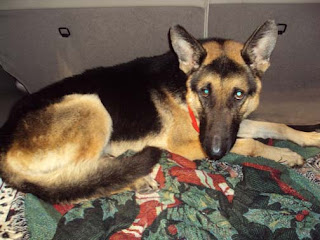 So mom kinda lied, Robbie did come to our house! But just for the night. He's here so mom and dad can get an early start on his transport tomorrow.
First, mom had to take him to PetSmart to get groomed...she said he was NASTY way nastier than I could ever think of being (I find that hard to believe...and dare I say, a challenge??). And the peoples at Petsmart were so awesome and felt so bad for him the whole thing was on the house! Which mom means FREE! Maybe I should rethink my spazzy hatred of PetSmart? Hmm...
Robbie is super sweet...a little shy, but a sweetie. He did great at Petsmart and the groomer said he was fantastic except for the dryer (can you blame him??). Duncan and I met him and he seems cool. Poor guy is like Kate Moss skinny though, he's only 56lbs and should be close to 80!
Right now he's asleep in the spare room. Mom fed him some of our old kibble by hand and he nicely ate it all. He also drank like a horse. She's going to take him out in a bit to see if he has to potty. He has a long 12 hour drive tomorrow to his new home in Tampa. Mom and dad are taking him three hours, then other awesome people are taking him the other parts.
I think mom is doing pretty good for her first transport. She doesn't need any of those silly Star Trek transporter thingies, she's all up on it. She was a little stressed earlier, but she's fine, drinking a glass of red grape juice, getting ready for tomorrow. Here's a pic of Robbie she got in the care after he came from the groomers...before our camera started acting all freaky! Great timing camera! Geez!
Posted by Anna the GSD at 10:05 PM