You have TP on Your Shoe 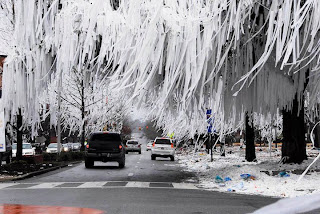 This weekend was pretty low key. But I was a bit worried when mom and dad got up WAY early on Saturday. I mean, Saturday is sleeping days. But they got up, and before they left they put my lucky Auburn collar on me.

Yep, mom and dad went to gameday in Auburn and left Dunc and I at home. But at least they left the game on for us too!

One of the big traditions in Auburn is after a win, they roll a tree. With toilet paper. I don't understand this, cause mom yells at Mia when she unrolls toilet paper (TP bandit anyone!?!) but it's fine for the peoples to roll a tree. Maybe it keeps the squirrels out? 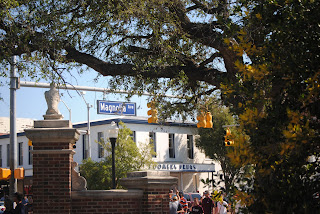 Toomer's Pre-Mississippi State Game (with Toomer's Drugs in the back)

Toomer's drugs is on the corner of College and Magnolia Streets, the heart of town, so the area is known as Toomer's Corner and these are the Toomer's Oaks. People have become engaged there, taken thier little peoples for their first gameday experience there and it's just a place where all Auburn Fans unite. 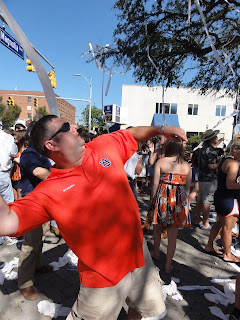 Dad gettin his ROLL on!

They've been through a lot, the Civil War, been caught on fire, but sadly, some freak fan of the other team poisoned the trees last year with some hard core plant poison. Yeah, way to step up and kill 135 year old trees! But the trees are fighting, we don't know if they'll make it or not, so mom and dad were hoping we'd win so they'd get to roll the trees, maybe for the last time. (and we hold no animosity to the other team, just their stupid fan. I want to put the bitey on him!) 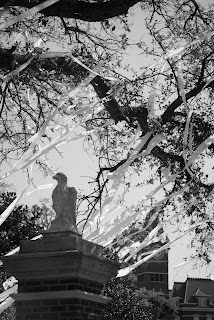 So the Auburn Tigers pulled it off against the Mississippi State Bulldogs (kitties beat dogs, sorry) and mom and dad made it to the Corner with thousands of their other Tiger fans.
Mom and dad also got to see some old college buddies they haven't seen in forever! They then went to their favorite restaurant in town then came home. They credited the win to me wearing my Auburn collar. Well duh! 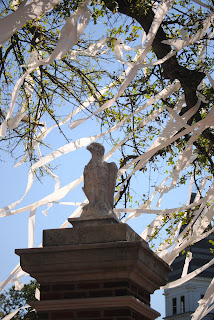 Maybe one day I'll get to go to Auburn and get some photos of me with the tree. I wonder why we haven't done this yet?! 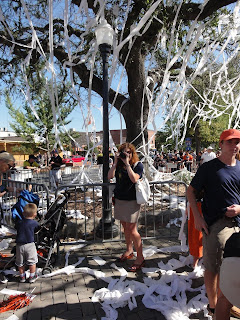 Mom NOT getting a photo of me! Boo mom!