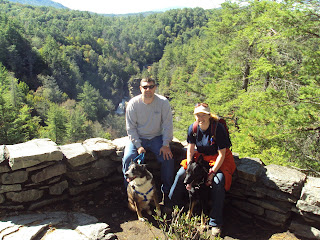 This is a photo of us last year at Linville Falls. Mom calls it our "family portrait". :)

We're getting all packed up. Mom says we have about as much stuff as they do!! Whatever...well...maybe....

Dad says we're leaving in the morning no later than 7 a.m., which should be interesting since mom doesn't do well nor function nor is friendly before 7 a.m., but she said she would make an exception since this was for a fun roadtrip not a "going to work" roadtrip.

The petsitter also came by last night to go over Simon's drugs and food routine (he's still stealing turkey noms). She was very nice, and one of mom's friends. Simon was not happy though that someone else is going to be giving him his pills, and that we would be leaving him. Maybe I'll get him a pinecone or something as a gift? Do kitties like pinecones??

Anyway, last year, when we went to NC this time of year, the leaves were just starting to turn (seet here's a lot of green in the photo above). But this year, they've had some freakisly cold weather so now all the leaves are turning early! Here's a photo from the BlueRidge Pkwy. Daily Facebook page: 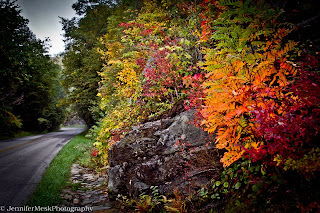 Jennifer DeSimone Mesk took this wonderful photo off the BRP. Aren't the colors AMAZING?!?!
And since the leaves don't tecknikally change until mid-late October, we should she beautiful leaves while beating out the "leaf people" who schedule their vacay's that time of year! Booy-yah!!

And since it's still cool, mom and dad are going to make S'mores which means I get Marshmellows!!! And maybe a fire-cooked hotdog! NOM!!

So stay safe my friends. I'll see you all in a week and a half. I'm sure I'll have tons of photos!
Posted by Anna the GSD at 9:16 AM