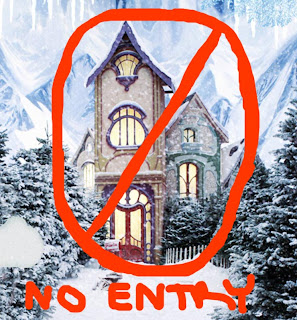 Hello all! Sorry I’ve been missing, but I’ve been trying to gain access to the NP (that’s North Pole) to get the scoop on this Santa fella. It’s been really hard, and alas, I’ve failed. BUT I did decided to use my time machine to go back and find out the truth about Santa, since I can’t use it to get to the NP, but I can use it to go into his past!

See, the man in red has many names other than Santa, he’s like the Prince (or artist formerly known as) of the holiday world. Santa Claus, Saint Nicholas, Kris Kringle, Father Christmas, Pere Noel and more.

Apparently it all started a looooong time ago in Italy.

These three Italian lady peoples and their families weren’t doing too well on the money front. And back then people had “dowries” or basically money for some dude to marry their daughters (mom said this wasn’t the case with her and dad, she was a broke college student). The dad of these girls was so desperate to get them married, that he was going to sell one of them into slavery!

But Saint Nicholas heard of this, went to their home late one night and anonymously threw three bags of gold down the chimney. Oddly a bag fell into each of the girls’ stockings that were drying by the fire. This gift allowed all girls to marry and not have to be slaves!
Later in his life, St. Nicholas tried to help others by giving unselfishly to others, and legends of his kindess spread all across Europe. Sadly, Mr. Nick died and on the date of his death, December 6th, was commemorated with an annual feast, which gradually came to mark the beginning of the medieval Christmas season. On St. Nicholas' Eve, youngsters would set out food for the saint, straw for his horses and schnapps for his attendant (I’m sure there was something left for his dog too…ahem). The next morning, obedient children awoke to find their gifts replaced with sweets and toys. 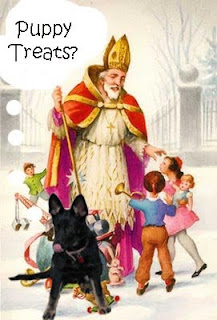 So what does it take to be Santa? Let’s see… 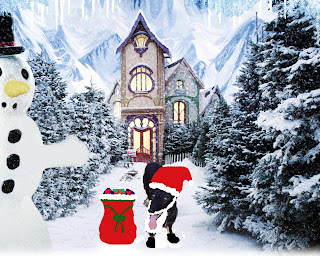 Whaddya think? Think I can pass as Santa Paws?

I hope everyone is enjoying their Christmas season! I know I am!
Posted by Anna the GSD at 11:07 AM