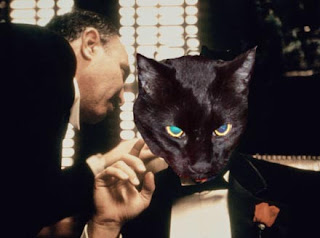 You know how yesterday I talked about how the kitties were in direct violation of the "kitties catch/kill vermin and bugs" role that they have? And this resulted in my flu-bug hunt and stink eye to the kitties? Well, the kitties decided to show me up. 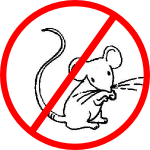 What do you know, Mia the little fuzzbutt one up-ed me by catching and killing a mouse. In the house. Now she's a flippin hero! Hmph!
I mean, seriously. What's the chances of this happening? I know she did it just to show off. She probably had it in a little box somewhere, waiting for the perfect moment to release it just to make me look bad. Here I was spending my weekend hunting the stupid flu-bug they let in the house and get mom to begin with, and she trots her furry butt and catches a cute little mouse that is in NO WAY attacking or killing anyone and now she's getting called great things like a "awesome mouser" and a "natural hunter."
For real?? This is the same kitty that jumps IN THE BATH TUB! Doesn't sound like a kitty genius mastermind to me! Sigh.
Because of that very reason, I know Mia didn't think of this by herself...she's not that bright. It had to be Simon's master plan. He's like the Godfather of the kitties. He wants nothing more than mom to himself so I know he used Mia as a pawn in his sick little game. Well I'm on to you! I'm keeping my eyes and giant ears on you!

So for now, the kitties are getting the glory of saving the house from the impending mouse-pocalypse, but Ducn and I am on to them! Go Team Dog!!
Posted by Anna the GSD at 9:00 AM