There Goes the Neighborhood...

There's been some strange activity in the 'hood lately. Besides my nemisis, Socks the Devil Cat, there have been some characters waltzing around.

We live in a pretty suburban neighborhood, we're not out in the country or anything. Although, our property ends up against a railroad track then woods beyond. It's an older neighborhood so there are lots of established trees. All of this is part of why mom and dad chose our house. But apparently, with the trees also comes some sketchy characters.

Exhibit A: The band of marauding turkeys.

They just walk on out, stand in the road and eventually wander off. At first mom thought she was seeing things. But then dad saw them too! And this is also right by a school, there's some pretty heavy traffic there in the mornings, but these turkey's ain't scared...they're hard core gangsta turkeys. 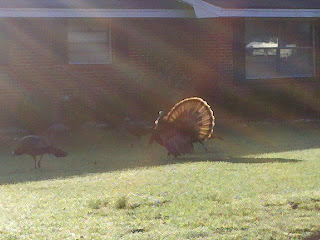 There's about 7-8 of them...but we haven't seen them in a few weeks. Dad says it's because it's now officially turkey season here, so the turkeys must be smart! They ain't scared of a car, but they are scared of becoming this: 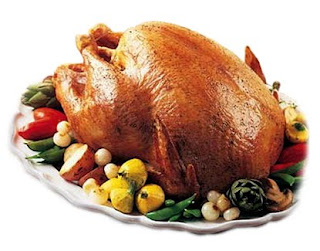 Exhibit 2: Apparently I have some long distance relatives coming to visit. Can you see them in the photos? 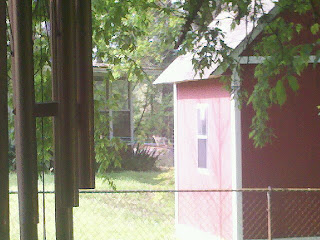 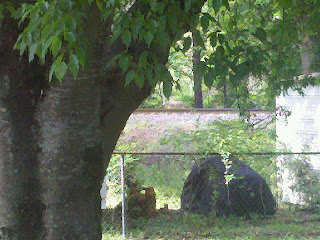 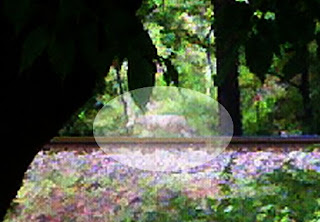 Yep, that's a coyote! Not just one, but there are two. Dad caught these with his camera phone so the quality ain't great, but almost every day, about 12:30 or so, a pair of coyotes go down the tracks behind our house! 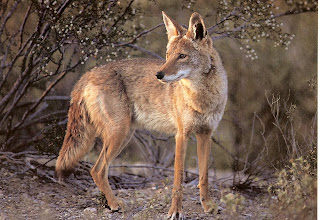 Mom did some research and apparently late March is when coyotes turn on the Barry White and "get it on"with the languate of l-o-v-e. Mom thinks that this pair may have a den close by. So we'll wait and see if we hear any little coyote howls in the next few months!
We've also had a pair of "fighting" raccoons we've heard in the woods, but I have to stay away. Mom says there's been reports of rabid raccoons lately! Oh my! We've also seen a bobcat walk on the tracks as well.

So it seems my 'hood is going wild! Do you have any interesting neighbors?
Posted by Anna the GSD at 9:33 AM