Today I’m going back to the time machine and back to black and white…seems today in 1863 was a very important day for the mailman. The day of the Gettysburg Address. 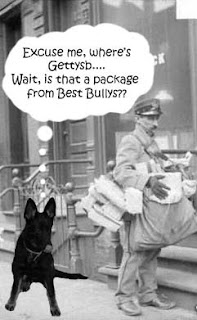 After looking for HOURS for a mailman to show me the way to Gettysburg (you think it would be easy, since it’s all about the address. Sheesh.) I finally found a big group of peoples.
I snuck up on stage and had the honor of guarding Mr. Lincoln’s hat. He was the head people, or the 16th pezident of America. 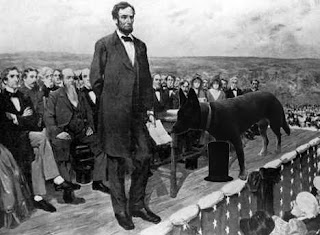 The speech was actually to commemorate a cemetery that had to be built for all the war peoples who died during the battle of Gettysburg. Apparently, Gettysburg already had an address but this was a speech to the peoples.
Apparently, two groups of peoples got into it. So, one group of peoples packed up their toys and headed home. The other group didn’t like this, so the Civil War started. Gettysburg was one of the biggest battles with like 50,000 peoples dying. Humph, sometimes peoples are sooooo stupid!
The speech Mr. Lincoln did was very moving and important. He said:
“Four score and seven years ago our fathers brought forth on this continent a new nation, conceived in Liberty, and dedicated to the proposition that all men are created equal.” 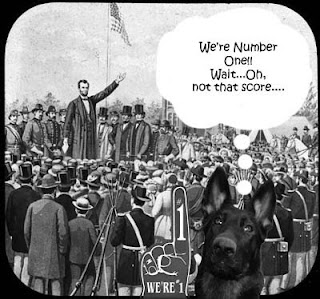 I don’t think he was talking about football scores, but I have no idea. What’s important is the “all men created equal” part. And while I’m sure he didn’t mean to leave out puppies (cause we’re equal too), I think its something all peoples should remember. Do be haters yo!
Posted by Anna the GSD at 8:42 AM