The Mystery of the Missing Hour 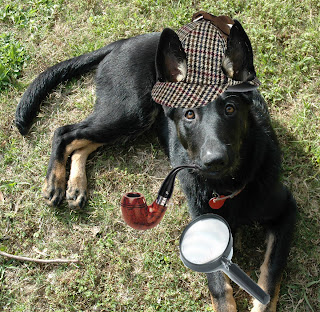 What a great weekend! We had our Tongue-tacular winner, I played with Rebel and Auburn won the football game versus the Ole Miss Rebels (no relation to my cousin Rebel).
But then something freaky happened...time went...umm...backwards?
Mom said it was due to some bull-larky called "daylight savings time." Apparently mom and all peoples set their clocks BACK an hour. I still don't know why the crap they did this, but it's caused some horrible consequences...
1. We ate dinner an HOUR later than normal...but mom said it wasn't dinner time yet but it really WAS dinner time, but it wasn't. I'm so confused. And hungry.

2. Simon is pissed. Simon gets fed a little can of kitty food each morning when mom wakes up. But when mom didn't wake up on time this morning he howled like a banshee making mom get up. After she got up she threw him in the laundry room with no canned food...mumbling something about that #%&!#! timechange and how the kitties have to learn the new feeding time. Simon finally got fed when she woke up an hour later, but he was still pretty ticked off.

So, I've decided to put on my Sherlick Holmes hat and try to find out where this hour went so everyone would be happy. I looked everywhere...in my toybasket, in the yard, behind the couch, everywhere. Nada, zip, zilch.

Then I remembered yesterday I saw a squirrel run up my tree, and I got to thinking how the squirrels stole my nuclear monkey arm...could the fuzzy bastards also steal time?!? Is this part of their stra-tee-gery in the great mutant squirrel war?! I'm going to have to keep looking!
Posted by Anna the GSD at 10:30 AM