Time Machine Thursday: Unsinkable? Not So much...

Time to dust off the time machine and get ready for another time-machine Thursday post! 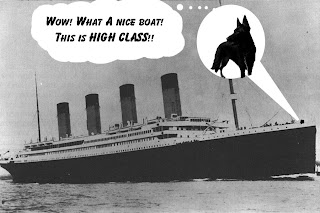 As you can see in my biggiefied picture, I was aboard the RMS Titanic. I decided I'd check the place out. 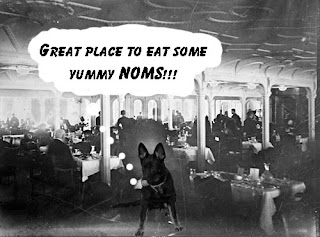 The dining was first class...then they told me they didn't serve dogs there. What the crap?? Don't they know who I am? They sure are snooty!! 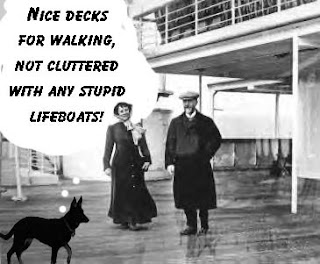 The decks were clear, as you can see there are no lifeboats cluttering the deck. The peoples said because this ship was "unsinkable" why do you need lifeboats? I don't know if this is a good idea...one should never tempt fate. It's like saying "I don't have to go the Dr. Vet, I'm healthy!" then you eat a bumble bee or something and have to go...fate has a wicked sense of humor! 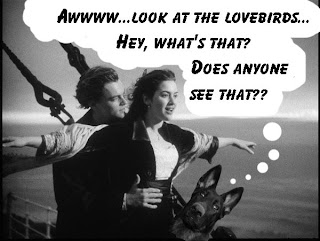 Peoples were all lovey-dovey on the boat. Take a look at these two. I'm sure they'll be together forever...they've never let go! It was at this moment I, the smart dog of the boat, noticed something... 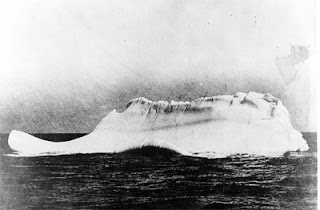 ICEBERG! Dead ahead! It's like giant snow, and I don't know much about snow but I do know that when it snows in Alabama it's a natural disaster, we should probably steer around this...umm...anyone? Captain? Helllloooooo! 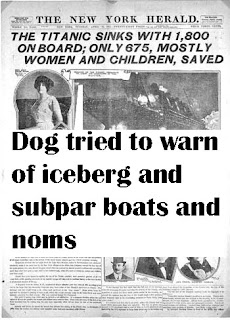 Yeah, they didn't listen to me. Sadly over 1,500 people died on the Titanic when it sank. There were also some pets.

There were either nine or ten dogs, a pet pig, and Jenny, the ship's cat on the boat. It's thought about three dogs survived and possibly the pig. Not sure about the kitty.

Well, there's your history lesson for the day, I'm off to get ready for school tonight!