Time to dust off the Time Machine for a trip back in time! Did you know that 137 years ago today, the famous magician Harry Houdini was born? Do you have any idea how old that is in dog years?? Like a billion years old!!

Anyway, Mr. Houdini didn’t just pull bunnies out of hats and stuff, he did scary escaping stuff. He was actually born in Hungary then came to America as a little boy, I guess cause they had no noms in Hungary.

He was called “The Handcuff King” cause he could escape from handcuffs and chains and stuff. We might could learn something from this.... 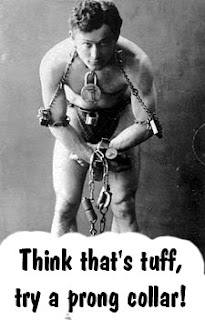 To prove he was doing it without tricks, he'd often do them almost NEKKID!! 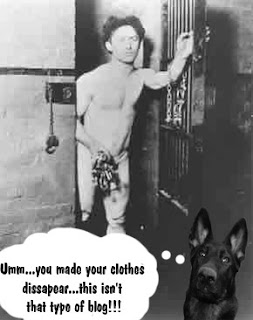 He did stuff like escaping from a skyscraper while hanging upside down, getting out of straight-jackets, being burried alive and other such weird things... 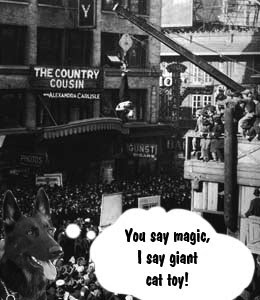 One of the weirdest (to me and I think you'd agree) was the Chinese Water Torture act! They'd go dunk him in water all tied up, and he'd escape before he'd drown! I often feel like this during bath times...so I guess I can sympathize, but why would you do it willingly?!?! 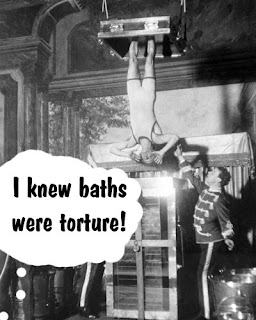 A lot of people think that Mr. Hou escaped by swallowing a key and upchucking it furball style and then using it to escape. Most times he escaped hidden...in boxes or in the ground.
But then, still at the top of his game, at the age of 52 this happened: 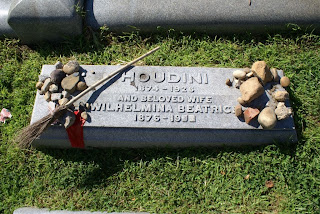 Not by one of his magical tricks, but by something even Mr. Hou couldn't escape...a ruptured appendix. He actually collapsed on stage in Detroit then died later that night.

So the lesson here, bath's are torture, you can cough up a key and don't ignore when you're feeling bad, go to the Dr. Vet or Human Dr. Vet. Ta-DA!!!
Posted by Anna the GSD at 12:25 PM