Give me the Nobel Peace Prize!! 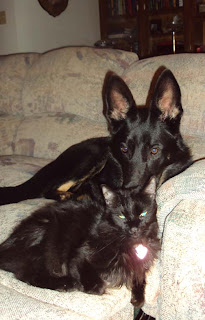 You can suck it Al Gore!! I have accomplished the impossible! I have....drumroll....MADE A KITTY FRIEND!!!!! Yay!!!
After MONTHS of trying to get one of the three kitties to like me, I've succeeded! Simon and I are now BFF! No more black on black crime! Well, maybe we're not quite BFF, but we're friends to say the least. I've been working on him...seems he now apparently likes my attempts to groom him like a kitty does, even though it leaves him soaking wet looking, but I think he likes it! Seriously!
Mom documented these photos for me while I was working diligently on the peace talks (aka passed out). 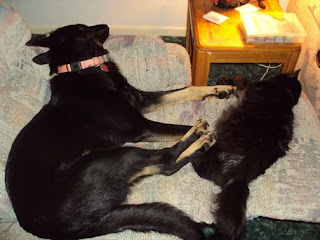 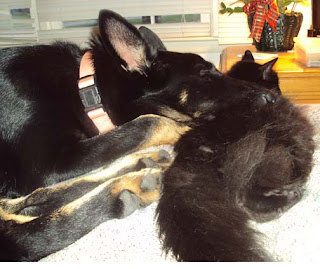 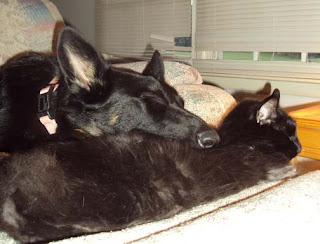 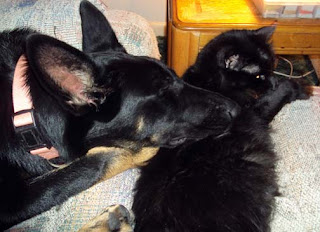 I'm so happy! I wonder if I need to make him a friendship bracelet? Or bring him a stick? Or some poop? What do kitties like?? Hmm...I'll have to do some research on this. Now for the other two kitties....Mia is less "gunshy" as mom calls it (I don't understand this, I'm not running around with a Gat or anything...) and I occasionally get to sniff her. The fat one, Alley, basically still hides under the bed and makes devil noises. Maybe Simon being the eldest will have some pull on the continuing Kitty Talks of 09. I feel like Bill Clinton (minus the callgirls)!!
Sidenote: mom says please ignore the blinds in the back, those are not "torn" but instead have been outfitted with strategic-ally placed peep holes for me to keep an eye out on the hood....
Posted by Anna the GSD at 9:46 AM