Hey all! I'm recovering from my surgery as mom said "swimmingly" which I thought meant I was going swimming but that's not the case, apparently this is a stupid human word for "good". Just say what you mean mom, my puppy brain gets confused sometimes. Geez!

The itchiness of my tummy hair growing back is less, which is great. Do you know how hard it is to scratch your own tummy when you don't have thumbs? It's near impossible people. Here's a shot of my awesome shaved belly! And yes, I've been working out. 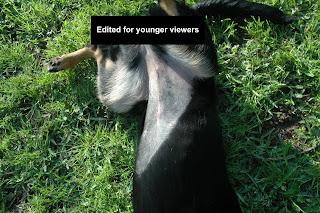 In more important surgery news, mom astounded me with her medical skills! Somehow, my radioactive nuclear monkey lost an arm. I have NO IDEA (ahem) how this happened...I mean, there's not way I did it (ahem...that is not stuffing you see in my mouth) so I'm blaming a kitty. Yeah, yeah, that's the ticket! Always blame the dastardly kitties!

So nuclear monkey had a gaping wound with stuffing coming out. Oh ,the horror, the pain, the stuffing was everywhere! Since I don't know nutthin about fixing no monkeys (I watched Gone with the Wind with mom the other night), that's when mom lept into action with a needle and thread to repair nuclear monkey. I sat and watched anxiously hoping the patient would make it...mom said she didn't think she could reattach the arm, but she could stop the profuse outpouring of stuffing.

After several touch and go moments I give you, nuclear monkey, amputee: 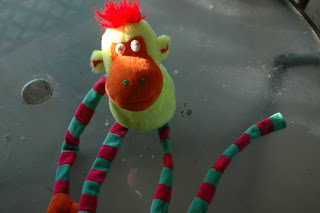 I inspected mom's work. Nuclear monkey was just as good as new, well, minus an arm. His squeaker is still squeaking, it was awesome...then I smelled it, the leftover aroma of stuffing...and loose arm... 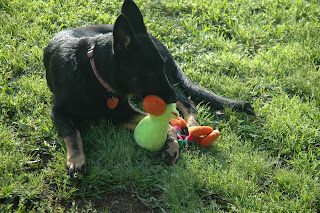 I couldnt' help myself. Like a crocodile of the Nile sensing the weak water buffalo or a great white shark smelling blood in the water, I was drawn to the leftover nuclear monkey arm....the following photos are not for the faint of heart....

This is when I began the death roll, much like a crocodile. I don't know what over came me! 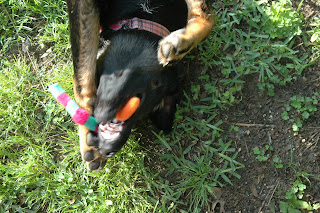 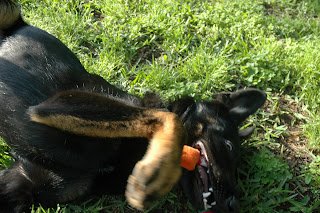 After the aroma of stuffing and loose monkey arm subsided, I came to my senses...where am I? What am I doig? Why is there a disembodied monkey arm in my mouth! 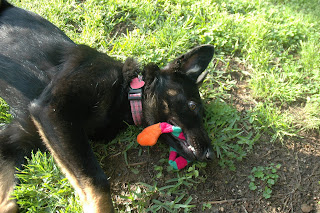 Mom just shook her head, put nuclear back in the house and said she'd leave me with my arm. I feel like a monster...I think I need help. But I am enjoying the new extra toy of nuclear monkey arm. 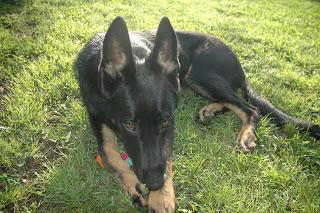