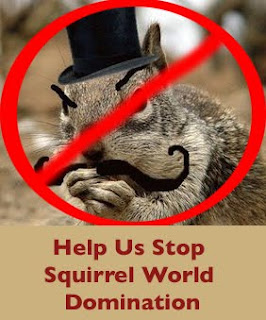 As you've probably noticed, I don't like squirrels. You may find yourself asking "Anna, what do you have against squirrels? They're kinda cute!"
Silly peoples! That's their disguise! As many of my puppy (and even kitty) friends know, squirrels are planning world domination. I ask you now, my brothers and sisters, join me in preparation for the great mutant squirrel war as we must defend our peoples from these evil creatures!!
What signs are there that the war is coming? Here is what I've noticed on my recon missions in the back yard...
1. Squirrels are hiding landmines...they may look like acorns and nuts, but seriously, why the hell would you bury a nut? Why don't you eat it? Take note of where they place these landmines in your area, it may be the difference between life or death!
2. They are learning to take over our peoples power! Have you seen them on the powerlines? Do you know what they're doing? They're researching ways to cut off our peoples power...meaning we'll all be left in the dark as these little devils scramble about...some of them have even sacrificed themselves for early testing by getting fried into squirrel burgers. Have they no shame?? (And totally off topic, if you have the chance to find a fried squirrel carcass I HIGHLY suggest it...it's like the filet mignon of dead animal carcasses).
3. They practice their ninja moves by invading bird feeders. No matter how silly peoples think they make a squirrel proof bird feeder, they are just helping them train by honing in their ninja attack-break-in-robber skills. Let them have the stupid bird food, challenging them is just making them an even more scary opponent. Way to go stupid humans!
It seems no matter how many we take out, their armies keep growing. On our walk I noticed something horrible...there were like 20 squirrels under a giant tree planting land-mines. It looked like something out of Night of the Living Dead, but instead of zombies it was SQUIRREL ZOMBIES!! It even creeped mom out. 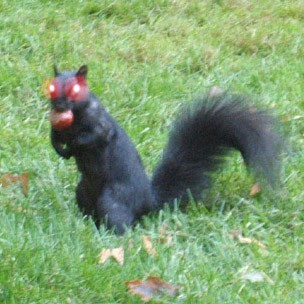 Be vigilant, be alert and protect your peoples. The war is coming my friends...and if we must join with the kitties to win this fight, that's a chance I'm willing to take.
Posted by Anna the GSD at 9:53 AM