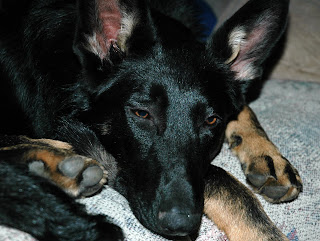 Sigh. While the last few days have been awesome with cupcakes and toys and whatnot, I swear, all this rain is driving me crazy! It's rained here like everyday for two or three weeks!

My yard is a mess. The grass is tall and my mud pit/hole is in a constant state of disrepair. I am worried that it's going to be condemmed. There was finally a break in the rain enough for dad to try to cut the grass but then the wheel came off the lawnmower (I thought this was funny, apparently, not so much to Dad) so we have this lovely crop circle in the front yard.

Oh, and ants are freakin everywhere!! Ants are basically impossible to attack. The only good thing I've found is that the froggies come out but there's only so much froggie squishing a girl can handle.

We haven't done any tracking since mom was sick and the rain has been so bad. I can't go play in the creek cause the creek is flooded and mom say the "curr-ent" is too strong and might sweep me away...which sounds like a bad thing.

At least I'm not in George-ah where apparently it's really bad. I hope any of my George-ah friends are okay and safe with their peoples.

Mom said she's never seen so much rain before...me neither, but again, I'm only like one so I'll have to take her word on it. Mom says hopefully it will be sunny when we go to the beach this weekend. I hope so! I need some Vitamin D! Stat!

It's so rainy I haven't even seen any squirrels! I thought I saw one the other day, went to chase it and it was just a stinkin' pinecone. Bah. Rain sucks cat poop.
Posted by Anna the GSD at 9:37 AM