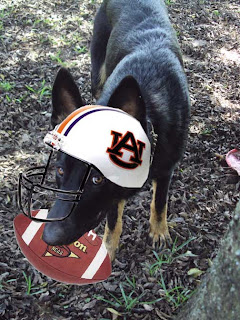 Mom and dad are both REALLY excited...at first I thought maybe they were excited about a new toy or chiken or they might have realized the joy that is chasing the kitties, but then dad told me about football.

This is my first football season and while I don't really understand what it's about, I have learned the basics from mom and dad:

1. Auburn University aka the Auburn Tigers are the ONLY team to cheer for. The exception to the rule is anyone that is playing the University of Alabama. Dad said they were giant squirrels in uniforms. Boo!!

2. Mom and dad will probably be very loud Saturday night as they scream at the big moving picture box thing. I've been warned.

3. They may be gone some Saturdays for the next couple of months as they make the pilgrimage to Auburn to actually go see a game and possibly end up on the picture box thing...this really confuses me!

4. Mom will be making some yummy "game day" foods that she might let me have! yay!

5. The point of the game is to chase the guy with the ball. I think I like this game. I wonder if the ball has a squeaker in it? That would be AWESOME!!
Mom is wanting to make me an Auburn banana to wear for gamedays...I was confused as to how she was going to make fruit and why would I wear it, but then she said it was a BAND-ANNA. I get my own band!!

So Saturday is my first gameday with the peoples. Dad has been working on some tackling with me and I work on my moves as I run away from him with my ball. He said I'm like a running back...whatever the crap that means.

I'm looking forward to it. It's also a loooong weekend so mom will be home for three days! Yay! I love long weekends. Dad has to work on Satur-day and Monday, but he'll be around Sunday.